What Does Success Mean For A Blogger? Income… Or Being Famous?

I want to talk a little bit about what success actually means for a blogger.

Now, this is an item that can generate some debate and, in fact, what brought it to mind for me was actually a question that Deborah Ng (she’s the community director for the New Media Expo) actually brought up on her personal Facebook profile. And she started off by basically saying that,

I’ve been thinking a lot about some successful bloggers I know lately. They have big names but the income they bring in from blogging isn’t very much. Many of them talk about how successful they are but they have to seek out sponsors to go to conferences or sometimes just to pay for web hosting.

And she goes on from there… and it’s a very valid point. There’s way too many people out there who were talking about how successful they are or allowing people to assume that they really know what they’re doing in terms of blogging success but yet they can’t seem to pay for just basic necessities or they get a day job.

And this leads to the whole question of… exactly how successful are you REALLY or are you just “acting”?

Now, there is a whole thing out there about “fake success” and there are a lot of people who do this. They portray themselves as successful and yet they hardly make any real money from their websites. These kind of people tend to be more like social media butterflies, but they’re really broke! They get lots of Twitter followers, they might get a number of comments, or they’re quite out there on the social media scenes so people think they’re a big deal.

One of the big things about this is that often, people from the outside will look at people like that and they will assume – just because they’re so prevalent on the internet that they’re automatically successful. That’s not necessarily the case. Maybe they’re just really good at being loud and saying lots of things. It doesn’t necessarily mean this is leading to anything that actually has an impact on their real life. So don’t necessarily jump to those conclusions.

You also have people who come off as successful but yet, in real life, they’re an employee because they literally are just being paid to write posts for somebody else. So, yes…they are technically making money as a blogger, but essentially they’re an employee.

So, I don’t look at it necessarily the same way. I don’t take anything away from them. 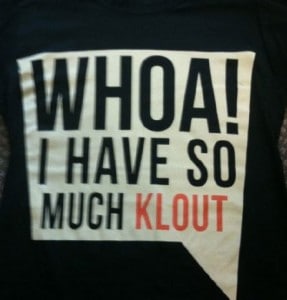 Now, there are a lot of BS metrics that a lot of bloggers look at. They tend to look at the wrong things. They look at vanity metrics and they’re thinking, “OK, this is what’s important”. So they really overly concern themselves with things like how many comments they get, how many Twitter followers they have or how many Facebook fans they’ve got. And these are vanity metrics. They might make you feel warm and fuzzy and if your main goal is just to become famous, then knock yourself out.

Here’s the truth about it…

How many comments you get on your site does not translate into anything valuable. I can tell you from personal experience. If you go to my tech site right now at PCMech.com and you look at the average comment count on a post, it looks pretty low. That’s because the tech audience doesn’t really comment a whole lot. They tend to be used to a one way flow of content. However, that site makes pretty decent coin. So it just proves right there that the number of comments does not equal anything that actually translates in the real world success. It is just vanity metric.

So, it really doesn’t matter how many of these vanity metrics they’ve got and how great they look – it doesn’t mean that they’re actually successful.

Now when it comes to REAL important metrics – or important in the real scheme of things – I think it comes down to:

These are probably the two most important metrics that you can look at in your business.  As far as I’m concerned, if we’re talking about true success for a blogger, these are the two big things.

I don’t have any exact statistics in front of me right now, but if you look at the average blogger out there and how big their email list is – it’s really low. There’s a lot of bloggers out there that are not even collecting emails. I bet you the average is pretty close to zero. So, how successful are they, really? How much leverage have they really built? Not a hell of a lot.

So those people who make truly full-time income at this stuff, they’re truly in the upper upper, upper one tenth of a percent echelon in terms of income made by blogging. I look at that as the measure of true success, not the people who are making 500 to a thousand.

All this to say that being Twitter famous doesn’t mean anything. It’s not truly success.

Obviously, for some people, income is not necessarily their goal here. Blogging is just a hobby for them and success is defined differently for that kind of person. So, I definitely don’t want to take anything away from anybody who’s blogging for fun. But if business is the goal then we need to concentrate on the right things here. Lots of fame doesn’t necessarily mean that you’re successful. It doesn’t mean anything at all. Some of the most “famous” people I’ve seen in social media  have day jobs because they can’t afford to make ends meet otherwise.

Now when it comes to real business, this is what truly makes success.

Most bloggers do not run businesses. They run blogs. And that’s really what is comes down to.

A blog is not a business. A business is not a blog. In order to really make money, you have to run a business.

What does a business do? A business creates success by creating products and providing services. And a business is what is going to create success and allow bloggers to make real money.

So if you’re not putting effort into creating products to sell, providing services to people, and basically running a real business and using the blog as a marketing vehicle for it – I don’t see how you’re ever going to find that true success.

As we wrap this up, I just want to make the point that Twitter followers and comments DOES NOT a business make. You cannot get those things and concentrate on those types of metrics and think that you’re creating a business for yourself. You’re not. All you’re doing is creating a lot of talking back and forth. You’re not providing anything of value to the world and you’re not getting paid for it.

So, at the end of the day, we need to keep those things in perspective. And if you are a true success as a blogger, concentrate on creating products to sell and providing services to people who need them.