13 Lessons Of The Cult of Done Manifesto

Sometimes I come across something which is just so freakin’ perfect, I simply HAVE to share it.

This is one of those things.

It is called the Cult of Done Manifesto. It was created by two guys named Bre Pettis and Kio Stark.

The statements on this manifesto are a powerful and simple way to think which will lead to success. Period. I have talked many times about the importance of taking action, getting things done, leaning forward. Not over-thinking, over-analyzing, trying to get things “just right” before you pull the trigger.

Here are the 13 points of the Cult of Done Manifesto:

Here is a graphical representation: 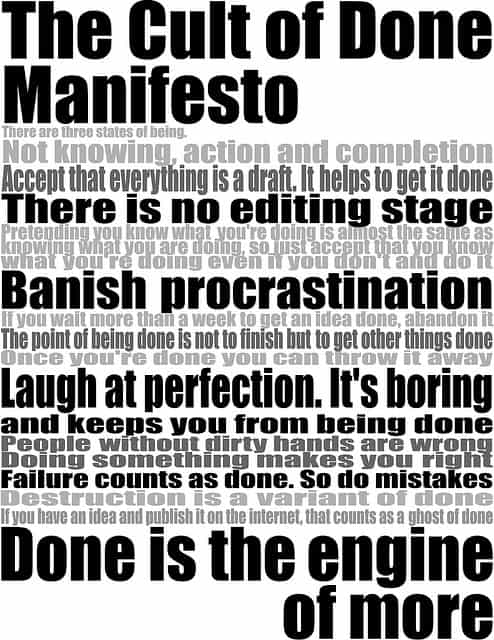 What do you think?

If you want to stop dragging your feet because of technical concerns with your blog and with WordPress… if you want to GET THINGS DONE… then check out my new workshop series: Demolish The Blogging Technical Confusions. Classes begin on August 7th.

A Productivity Tool That Has Transformed My Work Day (HINT: It Isn’t Software)