The headline sort of gives it away…

As of today, DavidRisley.com is now Blog Marketing Academy. And this site will now be accessible at BlogMarketingAcademy.com.

Changing the domain of an established website is a bit of gutsy move. It isn’t one that I take lightly. I had been debating the move for a few months – privately. Then, it was in the works for the last few weeks.

So, why the change?

And why “Blog Marketing Academy”?

This is a question with no single right answer. It also happens to be one which I’ve been asked about many times.

Should somebody build up using their own name…. or not?

I think everybody who has their own name available as a dot-com should own it. Period. In fact, I believe it so much that I even registered the names of my two children before they were even born. What one does with the domain is an individual decision, however.

There are examples of large brands built upon individual names. Names like Oprah and Tony Robbins come to mind. In our own little corner of the Internet, you’ve got folks like John Chow, John Paul Aguiar and Johnny B. Truant (the 3 John’s? 😉 ) who are still using their own names. And up until recently – me.

By and large, however, brands are not built upon personal names. In the case of a celebrity, the name has enough recognition, perhaps, to warrant such a thing. But, in our little corner of the Internet, the only people who associate our names with anything are people who are already fully aware of us. For everybody else (and that’s most people)… the name means nothing.

Not only that, it tends to pigeon-hole our names into one thing. And, like most people, I’m not solely interested in one thing.

One has to ask the question… what are the possibilities when everything is so tightly centered around an individual?

For one, it isn’t sellable. I mean, I have no intentions at this point to sell this website… but everything needs an endgame at SOME point. And, what would that end point be if I’m at the center of everything?

For my business to have the impact that I’d like it to, it needs to grow beyond me. It needs to be set up such that all lines do NOT necessarily have to run through me.

In short, I’m beginning to look at this endeavor as the creation of an organization – not just something to raise awareness of me. I want to create something which has the capability of operating without me… not because I have plans to check out, but because it is only smart to build it that way. Not only will it allow more impact, but it will do so without me HAVING to answer every email, be on every call – forever.

I have to say, I went in circles over the name of this thing for awhile. I had several really good possibilities on my potential list. In the end, I just needed to pick one and move forward.

For one, the new name has relevant keywords in the URL. I mean, nobody searches for “David Risley” unless they’re too lazy to type my URL in… or they’re looking for somebody else. Plus, you’d be surprised at how many people misspell the word “Risley”, so the name sucks for word-of-mouth promotion.

Secondly, I think the new name lends itself much better to the true purpose of the site, which is Marketing. After all, blogging is a form of marketing. “Blog Business Academy” was one of my other potentials, but I didn’t want to give the impression that I thought blogging was a business model… something I’ve been quite clear about in the past.

The name “Blog Marketing Academy” communicates with this site is about – merely by the name. That’s something that my personal name just doesn’t accomplish. And, the word “Academy” lends itself quite well to the idea behind the site – which is to learn.

The new logo is pretty simple. Just no need to make it complicated. However, the graphical component of it changed. 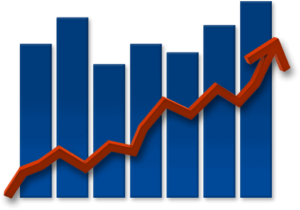 Rather than the big circle and the big “DR” in it (which are my initials, obviously), I had my designer create a graphical image of rising statistics. Again, the idea is to communicate the purpose of the site.

Something which is less obvious about that image is that the bar graph portion of that image is also symbolic of the structure of the organization I am creating. It is a broad layout of the design of a fully-functioning BUSINESS… something I’ll be getting into inside the Academy.

My Inner Circle program is going to become the Academy. It will become the focal point of all actual training, mastermind calls, forums and more. This blog will remain here while the in-depth stuff goes into the Academy.

And I’ll tell you more about this later… but I’m planning something very different about how people go through the material inside there. As I pointed out in my rant about the problems in this niche, too many people are suffering from information overload, lack of clear direction, overwhelm – you name it. And, I don’t accomplish my end product if that’s happening with the people I work with. So, I’m working on a system of management inside the Academy to ensure people get the results they signed up for… or they leave. It is that simple.

More on that soon. In the meantime, know that if you sign up for my Inner Circle, you are essentially signing up for the Academy… and you’ll get to watch the transition as it happens. In fact, you’ll be involved in the co-creation of it.

Oh, and if you’re a prior customer of mine via any of my products (including Blog Masters Club, which was just closed down), I’ll be in touch with you guys… because I’ll take care of you.

I want to thank everybody who’s been a reader of this site. It means a lot to me. And I hope you’ll continue to follow along as I plow forward into phase 2.

I think the “make money blogging” space is flawed in how it leads people. I think it leads bloggers astray in too many cases. I want to chart a new road.

I look at the stuff that CopyBlogger and ProBlogger publish day in and day out, and an old quote from Henry Ford comes to mind.

If I asked my customers what they want, they simply would have said a faster horse.

I know how he feels, sometimes.

Just decided (the day after this post was originally published) to follow suit over on Facebook. So, as of 15 minutes ago (as of this writing), the Blog Marketing Academy has a brand new Facebook presence. And, I’d love to connect with you guys over there.

It always WAS weird having two profiles on FB with my personal name.

ConvertBox Review: The Good And Bad Points Of This Opt-In Software And How It Compares (UPDATED)