My Feeds Have No Hand Crank! (Time to Ditch Feedburner?)

Well, let’s answer the question in the headline first…

It is time to ditch Feedburner. Or, at the very least, not be dependent on them in any way.

It looks like Feedburner has now entered the dustbin of projects that Google has purchased and then assassinated. Of course, as of this writing, that isn’t official. But, you can tell that Google sure as hell doesn’t view Feedburner as a high priority when they issue updates like this one:

That was posted a few days ago (again, as of this writing). And, still no change. There’s still no hand crank (whatever that means). 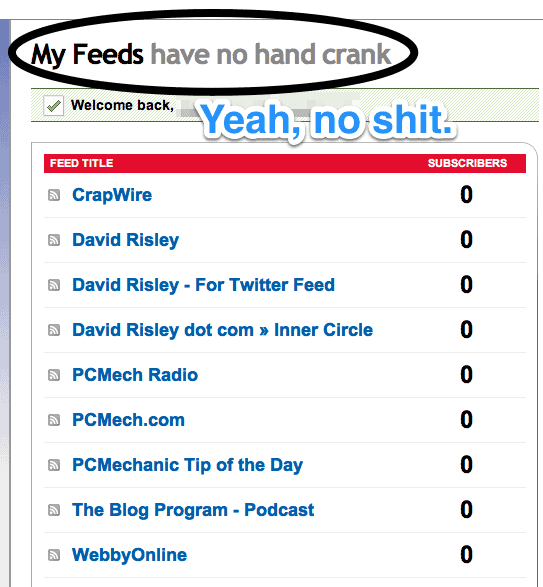 Well, in terms of important metrics, RSS subscriber count really isn’t very important. So, personally, I really don’t care about seeing all zeros’ on my RSS feeds. All I care about is that the feeds work.

Email is WAAAYYY more important than RSS – and if you’re using Feedburner for email notifications to your “list”, shame on you. Switch to a real provider like Aweber. Set up a “blog broadcast” and you can still auto-notify people of new posts – but you’ll have total control over the email list.

Lastly, it is probably a good time to set up a feed re-direct through your own domain. This is something I’ll be looking at, but what I mean is this…

Rather than linking your RSS feed directly to feedburner.com, link it through your own domain (i.e. www.blogmarketingacademy.com/feed/ ). Then, set up a re-direct that points to Feedburner if you really want to use Feedburner.

The benefit of this is that you can switch to any provider or RSS source you want without interrupting your RSS subscriptions in any way. Because all their feed readers are using YOUR domain which you control, they won’t know (or care) if Feedburner is delivering the feed or somebody else.

Another option is to switch to Feedblitz. Feedblitz has a nice RSS-to-email delivery option, and they actually stand behind their service. I used to not like Feedblitz because their interface was like dried dog vomit, but they’ve re-designed and they look very professional now.Feedblitz also has a handy (free) guide on how to migrate from Feedburner to Feedblitz.

Whatever you do, it is worth it to take a few minutes to evaluate how you’re handling your RSS feed and future-proof it. Whether Google ultimately totally kills Feedburner or not remains to be seen. But, one thing is indisputable… they really don’t care all that much about it. And, as a website owner, I wouldn’t want any segment of my business to be sitting in some insecure place where the people behind it don’t really have any real motivation to support it.