A Stupidly Simple, Yet Powerful Technique Of Keeping Laser-Like Focus On Your Business Goals 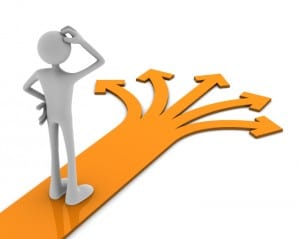 If there is ONE issue that I hear from folks all the time about what’s getting in their way in business, it would be…

And, going along with that is the idea of losing focus, not being certain what to do next, and generally just being flustered.

When there are seemingly so many things that have to be done simultaneously in order to find success online, overwhelm is pretty much the natural reaction.

Thing is… nobody is going to fix it for you. You’re going to have to get a grip on your own.

The truth is, there ARE a lot of things you could be doing for your online business, and all of it will bring results in one form or another. But, that DOESN’T mean you have to be doing all of it. In fact, trying to do all of it is a sure-fire path to rock bottom.

A Man With No Compass

If you go out into the wilderness without a GPS or compass, you’re likely to get pretty lost. In fact, it is highly likely that you’ll end up going in circles. It won’t FEEL that way in the moment. You’ll feel like you’re moving along toward your destination. But, then you see a tree go by and you coulda SWORN you’ve seen that tree before. You’re going in circles.

The same thing happens in the world of business. Because, in many ways, it is like a forest.

And, there are people in it who claim to know the way through it. Many do. Problem is, it seems like many of them are pointing in different directions. Who do you trust? Which advice do you follow?

Not having a compass sucks.

But, a compass is exactly what you need. However, in this case, you are the only one who can build it.

Time to create a compass for yourself.

What do all compasses have? They have a magnetic north, right?

Well, in our case here, our magnetic north should be our GOAL.

What is YOUR goal? Not the goal other people say you should have, but YOUR goal? And, you want that goal to be SMART (Specific, Measurable, Attainable, Relevant, Timely).

So, don’t make up a goal like, “I want to make money online.”, or, “I want to have a popular blog”. These kinds of goals are vague, not measurable and have no time limit to them. Thing is, these are exactly the kinds of goals many of you guys out there are operating with.

You want to get REALLY specific with your goal. If you’re just starting out online, then perhaps a goal like “Generate my first $100 online by the end of next month” might make sense. It is specific and it has a deadline. It also happens to be realistic.

So, state what your goal is. And, be SMART about it.

The next step is to break that goal down into specific milestones that will add up to that goal. You could call them “sub goals” if you want. These sub-goals would all be SMART as well.

And, the trick about these sub goals is that they are as specific as you can make them. Because we don’t want to be doing everything. We want to be focusing on those things which are most likely to bring the result we want in the shortest amount of time.

The third step is to break those sub-goals into specific things you will DO to bring it about.

Here’s a basic chart of how this works…

This is a basic goal of adding 100 new subscribers to the mailing list each month – a good goal for somebody just starting out.

So, you break that down into 3 areas of focus: Landing pages, viral components (for driving traffic), and retention (keeping the subscribers on your list once they’ve subscribed).

And, beneath those, you set up specific things to focus on to make them happen.

The Idea Behind This Focus Map

We are not multi-taskers. Some may not believe that, but we are NOT natural multitaskers. In reality, when you are multitasking, you’re actually switching “modes” quickly in rotation. You’re still doing one thing at a time, but you’re simply rotating your attention among multiple things.

Thing is, the more things you do that with, the less focus any one thing gets. The less likely any one goal will be accomplished.

Any time you add a new goal, the less likely it is that any of your pre-existing goals will succeed. Because, we are all blessed with a certain amount of throughput.

It is just like your computer. If you are running one program at a time, then that program is probably zipping along pretty quickly. But, if you’re running 20 programs at the same time, then each and every one of those programs is probably dragging. Or crashing.

So, the idea behind the focus map is to single out ONE area of focus. Then, ALL of your energy goes toward that one thing.

Using the example above, if the goal is to add 100 new subscribers to your email list per month, then this will dictate what you do with your allotted time. It will also help you filter out noise. Some marketer comes along with a new shiny object about membership sites? Well, whatever! You’re not going to get distracted by that because it isn’t part of your focus tree.

Somebody comes along with some cool opportunity to make a quick buck? Well, if your sole focus is decided by your focus tree and it isn’t in alignment, then you turn down that opportunity.

Start Putting This To Use Right Now

Two people in my own mastermind group are now doing this exercise each and every day. One of them is actually drawing out his focus tree on a new sheet of paper every day, then using it to align every action to ensure he hits his goal. In his case, the goal is to add 10 new members to his membership site per month. Anything that distracts from that is a sideshow.

I am now beginning to do this for myself, too. And, while I still have a thousand different things on my project list, simply using a focus tree is helping me put order into what I decide to do and what I decide to postpone.

So, what’s it going to be for you? What is your SMART goal? Remember, make it realistic, specific, and quantified.

Then, break it down into areas of focus. Not more than 3 or 4 of them.

Once you’re done with this, start evaluating the actions that you’re actually doing. Are they in alignment toward your goal? Are you doing stuff that you should cut out? Are you allowing yourself to get distracted from your goal by social media and other shiny objects?

Well, that’s where personal discipline begins. But, you know what? Once you see actual headway being made, the discipline comes much more easily. 🙂

If you found this post useful, or feel it could help others, I’d be HONORED if you would share it with your social networks using the 3 buttons below. Thanks!

A Productivity Tool That Has Transformed My Work Day (HINT: It Isn’t Software)