Can An Online Business Support The Life You Really Want?

In this post, we talk about how re-evaluating what you really need - and want - in your life can make it much easier to cut the cord to your day job. 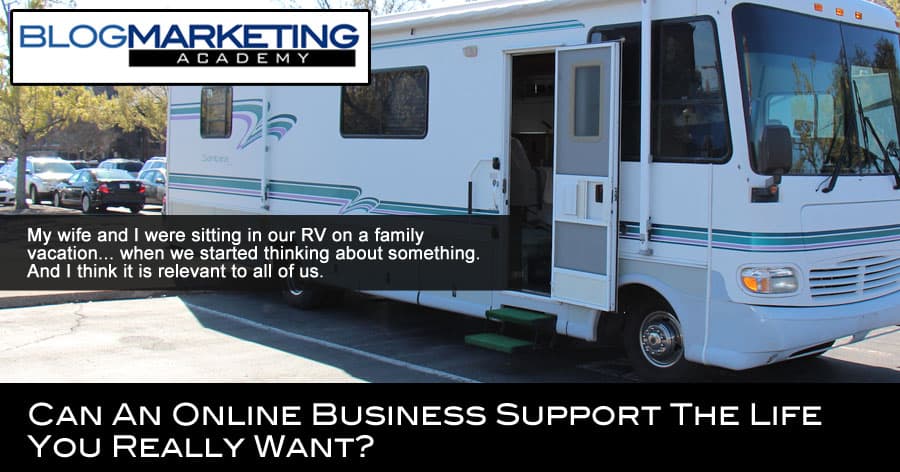 My family and I just returned from a week away in our RV. We traveled from our home in the Tampa area, up north to Savannah, GA, then spent a few days in Charleston, SC before heading back home.

We just bought this RV in September last year and this 7-day period was our longest single stretch essentially living in it since we bought it.

For us, it was a bit of a test. Would we all like each other at the end of it? Would we still like the RV after being in it for a week?

Well, as it turns out, we did. Which is good because we have a longer trip planned for the coming summer.

But, then this crazy idea came to mind one morning while we were eating breakfast…

What if we decided to RV full time?

No, this blog post isn’t going to be about the in’s and out’s of RVing. However, I AM going to talk about the mindset which a decision like that would rest on.

… because it has a lot to do with what many of us are pursuing when we think about creating an online business.

See, most people who pursue online business do it for one reason: FREEDOM.

This freedom from the 9-to-5 is very concrete, so that’s something many people focus on. But, what about the other trappings of life we create for ourselves?

As my wife and I pondered what it would take to travel in the RV full-time for a year, we started looking at the changes we would have to make:

As we looked at it, it became very apparent that we would need to make several moves which go AGAINST what is commonly considered to be the usual template of life in America.

All these things are mere considerations, however.

They are habits we get accustomed to. We find security in them. And, leaving those habits for the prospect of a greener pasture can be pretty difficult. And it is made even more difficult when the people around you will probably think you’re nuts for doing it… for they’re in the same trap you are.

But, let’s look at the flip side…

How “big” does an online business have to be to support a life of freedom if you’re willing to redraw those considerations about what you really need?

How “big” does an online business have to be to support a life of freedom if you’re willing to redraw those considerations about what you really need?

I’ve known several online entrepreneurs who have decided to travel abroad for extended periods of time. Living in many countries is far cheaper than living in the U.S. These entrepreneurs are often single and have no kids – which obviously makes things much easier. 🙂

But, I’ve met two families over the years who RV’d full time and made their living online. Their home was quite literally wherever they chose to park it. Expensive lifestyle? Again, not necessarily. My wife and I deliberately bought an older RV which was in awesome shape and looks newer than it is. Why? Because we could buy it with cash. And it is just as capable of traveling the country as one of these 100K+ rigs you see on the road.

What it comes down to is this…

A lot of the “stuff” we “have to have” is really just a consideration, and sometimes re-evaluating what you really need is a useful exercise. And sometimes, by reducing those considerations, you make it a lot more REAL that your online business could actually support your lifestyle.

It starts with a simple word: DISAGREE.

Disagree with what society tells you you’re supposed to have. Do we really need the big house, granite countertops, a fancy car? Does that stuff really make you happy, or are you just doing it to prove something to other people?

I think, deep down, most of us desire freedom to live the experiences we want. Experiences, relationships, self betterment, knowledge. While “stuff” and money is great, none of that can be brought with you when you die.

So, will my family make the move to RV full-time? It is very possible – but not yet. Plus, if we do, it would only be for a year, not a permanent move.

While my wife and I are more liable to disagree with life’s template than many, we still find ourselves with many of the usual trappings. Some changes would need to be made, and that takes time. Plus, there is the matter of my kids’ school and my wife’s job.

We’d also buy a larger, nicer RV. Is it totally necessary? Not really. The one we have would be fine. However, spending a year in it means we would WANT something larger. Plus, if I’m going to run my business from it, I need some things that our current RV doesn’t have.

But, I think it would be a cool experience – one of those things my whole family will remember forever.

This blog post was not the usual fare for this blog. That, I know.

What I shared with you was some of the thoughts we were having privately while on a family trip. But… I also think it speaks right to the heart of WHY we’re doing this.

Why build an online business?

What experiences do YOU want in your life? Would you need to shed any of the more expensive material trappings in your life to make it happen? And, would doing that then make it more realistic that your online business could support the whole thing?

The phrase “lifestyle design” has been used in many circles, I believe made popular by Tim Ferris. Well, I think the phrase is very pertinent to what we’re all doing here.

Decide what you want, then literally design your life in such a way to make it happen.

It is definitely the road less traveled, but the good ones usually are.

What do you think? 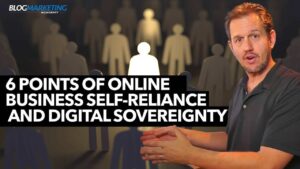 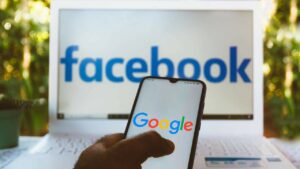