Launch fatigue. Its been an item of discussion lately in some circles, including by Dave Navarro, who had a great article about it. He also mentions a piece over at Productive Flourishing. May was a pretty packed month for product launches – in this market. And those of you who pay attention to it all were feeling pretty inundated and ganged up on. Some of the big annoyances I’m seeing out there are: As Navarro correctly stated, it isn’t product launches that are the problem. It is the repeated pattern.

Its been an item of discussion lately in some circles, including by Dave Navarro, who had a great article about it. He also mentions a piece over at Productive Flourishing. 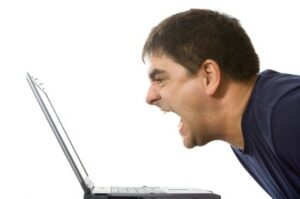 May was a pretty packed month for product launches – in this market. And those of you who pay attention to it all were feeling pretty inundated and ganged up on. Some of the big annoyances I’m seeing out there are:

As Navarro correctly stated, it isn’t product launches that are the problem. It is the repeated pattern.

You know it when you see it. The “shot across the bow”, as Jeff Walker puts it. Then, the prelaunch with the obligatory 3 launch videos. Throw in a few “gee shucks” emails. Then, the sales video. Launch on a Tuesday. Open for one week. Hype hype hype. Ooohhh… its closing soon and you better buy now! Did I mention buy NOW? OK, gone. And in some cases, make up some bullshit reason to open it again.

Its a PATTERN and those of us in this market see it repeated over and over again. Sometimes, launches overlap in a crazy way and the market just gets pissed off. In May, that happened.

It is going to get worse, too. I have a couple of good friends working on a done-for-you launch platform which is going to ROCK. I also know that Andy Jenkins is soon going to launch Kajabi. What does all this mean?

Product launches are going to become commoditized. The pattern, in some niches, is going to become so recognizable it’ll flow like a bad horror movie and be about as predictable as one.

Let’s Get Real For A Minute

If you’re paying attention to a bunch of people whose job it is to teach others how to generate money on the Internet, don’t be surprised when they sell stuff to you.

But, you know what? The rest of the Internet is out there. The “make money” market is pretty saturated, and the “make money blogging” market is getting that way. Other markets? They don’t recognize the launch pattern. You could pull off even downright corny launches and they’ll work better in other markets.

They don’t understand the pattern. But, the launch pattern is nothing new. Jeff Walker didn’t invent it. It has been used to launch everything from movies, music albums, new shows on TV, computers, software. You name it, it goes through a product launch campaign.

The only difference is that those campaigns are targeted primarily to people who don’t understand launches. They don’t think like marketers.

So, don’t become an advocate for the “un-launch”. It won’t work. Calling everything a “trick” and knee-jerking the other direction will lead you to nothing.

You can’t just put products out there and hope they get noticed. If you’re in a market which isn’t used to launches, then the usual pattern will work. If you’re in the “make money” market in any way, then you need to begin thinking outside the box. And that’s because you’re…

It is a fact. Once a market reaches a point of saturation, all your prospects will have their guard up – immediately. Because they’re expecting you to try to hammer them like a piñata until money falls out.

They’ll think that everything is a strategy and a tactic, almost to the point where they’ll come up with conspiracy theories and make up back-stories. You know, the “I bet he faked that server crash to make it look really busy” kind of crap.

[Reality Check: Anybody who wants your money is never going to make it so you can’t pay them. Server crashes as marketing stunts? It is a myth. Move on.]

If you follow the usual launch pattern, they’ll see it coming from a mile away. Your job, then, is a lot harder. You have to convince people to want your product who’ve already decided they’re not going to buy it. They’ll just get what they can from your prelaunch videos, then move on.

There are some products being launched that are REALLY, REALLY GOOD. People would benefit from them immensely, yet they get written off because they see it as “just another damn launch”.

What To Do About It

I see many new marketers make the mistake of thinking if you’re not one of “those marketer people”, then people are going to like you more and buy your stuff.

Marketing always needs to be done. The question is – HOW?

You’ve got to stir up the typical launch pattern. You want to have an event which is worth paying attention to, not just another shitty launch. So, some ideas off the top of my head might include:

It comes down to just BEING REAL.

I find that we’re all just DESPERATE for people who are just real with us, upfront, and honest. We’d rather do business with a dude we feel like we KNOW than some huge marketer who sits in a San Diego mansion and only emails us affiliate links.

This is why bloggers can do so well when executing product launches. If you know the marketing, know the pattern, but know how to shake it up just enough and keep your audience engaged because you are ACTUALLY engaged – you’ll crush it. You’ll absolutely crush it.

So, Tell Me This

So, here’s what I want to know from you.

Chances are, if you read my blog, you probably read some other bloggers in the same kind of niche. And you’re interested in making money from your blog and living the lifestyle that comes with it.

That being said, you’ve seen a lot of launches. And you’re going to see more. I’m going to be launching stuff, too, so it isn’t as if I don’t have a pawn in this chess match. 🙂

So, what would YOU like to see? What ideas do you have?

What would you like for me to do for you?

I welcome your comments.