It isn’t a secret that when we want to make money on the Internet, we do things like make sales pages and opt-in forms to collect leads. But, just putting up these things is only the start. It takes a continual process of optimization to increase the percentage of your visitors that actually DO what you want them to do. This is where split testing comes to play.

If you have never heard of split testing, then now is the time to learn what it is and how it works. I’m not going to make you an expert in this post. This post is meant to serve as a primer and we’ll get into specifics later on.

Essentially, split testing is simply testing one version of a page up against another version. You are comparing which of the versions performs better (i.e. more sales, more opt-ins, etc). Once you get a winner, then the top-performing page becomes your lead. You then repeat the process again. With continual split testing, you are constantly improving the conversion rate of your page. 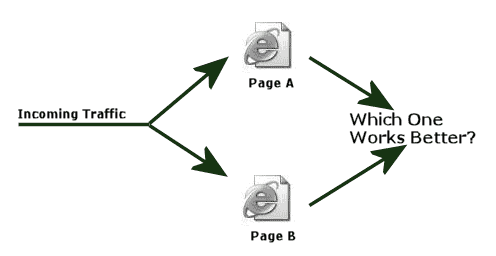 This form of split testing is simple called A/B split testing. The name comes from the simple fact that you have two different pages, Page A and Page B, and you’re simply comparing the results of each. Obviously, when going A/B split testing, the results are most meaningful if the two pages aren’t completely different. After all, you want to know WHY one particular page converts better than the other. For this reason, you don’t want to change too many things at once. Perhaps just change your headline, a graphic, etc. By doing this, when results are showing that one page out-performs the other, you know why. If the two versions are COMPLETELY different, then there is a number of different things that could be affecting the results and you have no way to act upon the test results.

The other type of split-testing (and more complicated) is called multivariate split testing. This is a split test where you are altering more than two elements in the same test (more than just pages A and B). Whereas A/B split tests just test one page against another, a multi-variable test can test any number of combinations. For example, you could test a number of different headlines, different images, different open paragraphs – whatever.

It works by dynamically inserting different test blocks into your landing page. For example, you would have your different headlines set up in your split testing system. In your landing page HTML, you would have some code which will dynamically pull in different headlines. Your testing system would then test all headlines and see which one performs better. If you are simultaneously testing other page elements (such as image placement), then the system will rotate these as well. Over time, the system will determine which combination of page elements converts best.

Multi-variable testing is more complex, but there is software to do it for you. Also, the more things you’re testing at once, the longer it will take to get meaningful test results. So, while you can load it up with all kinds of things, it is best to still limit your test elements.

If you run a test for split testing software, you’ll get a lot of different options. However, for most people, I recommend you just use Google Website Optimizer. It is a service of Google and it is FREE. How cool is that?

Showing you how to use Website Optimizer is a subject for another post, however Google has done a pretty good job of dumbing it down. By going through the wizard they have set up, you can set up a split test on your site pretty easily.

Split Testing On a Blog?

Split tests are usually done on opt-in pages and sales pages. You don’t see too many people doing it on blogs. But, there isn’t any reason why you can’t. A few technical issues will need to be worked out, but it will work.

The thing to keep in mind, though, is that blogs are not always conducive to conversions. Blogs are great for publicity and building relationships with your audience. But, when it comes time for a sale, the blog can be a distraction. Ideally, pages designed to convert a reader into some goal of your’s should be simple and not cluttered up with a complex sidebar, banners, or anything like that. You want to force your readers to make a choice on whatever it is you got on offer.

If you keep that in mind, split testing gets a lot simpler. Trying to run split tests on an offer when your reader has a myriad of outbound links on your offer page is going to seem pretty fruitless.

So, more on this later! For now, this is a quick introduction to split testing. And I recommend you start playing around with Google Website Optimizer. It is a handy tool. Bookmark it. Any serious internet entrepreneur WILL use it eventually.