The subject of getting traffic to a website is a BIG topic. It has a lot of moving parts and some things work better for some than for others. There is no single effective method to build traffic. If there were, everybody would be doing it. It is true, however, that some things tend to be more effective than others. My personal experience in this business has shown this. And I've seen new bloggers over-emphasize certain things and they end up wasting time. So, I've devised a chart to rank certain popular traffic generation methods in terms of effectiveness, scaled from 0 to 10. 0 means it is mostly a waste of time, and 10 means it works insanely well.

The subject of getting traffic to a website is a BIG topic. It has a lot of moving parts and some things work better for some than for others. There is no single effective method to build traffic. If there were, everybody would be doing it.

It is true, however, that some things tend to be more effective than others. My personal experience in this business has shown this. And I’ve seen new bloggers over-emphasize certain things and they end up wasting time.

So, I’ve devised a chart to rank certain popular traffic generation methods in terms of effectiveness, scaled from 0 to 10. 0 means it is mostly a waste of time, and 10 means it works insanely well. 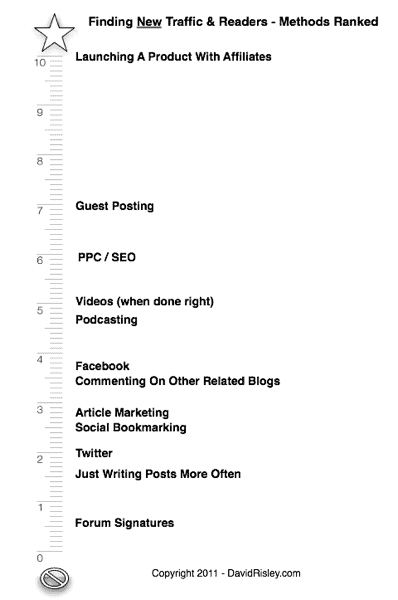 Now, first off, let me note something for you…

This is my OPINION. As I set at the outset, nothing is set in stone here and some people make things work better than for others. M’kay?

Launching A Product With Affiliates

For me, this was the single most effective traffic generation I ever did. For me, it was the second launch of Blog Masters Club. I had people like Darren Rowse (Problogger), John Chow, Robb Sutton, and many others…. all of them were promoting for me. That, of course, brought a lot of traffic over as people checked me out.

Plus, there’s a not-so-hidden truth about this (and perhaps some just don’t have the balls to say it, but I will)… when they’re trying to get their readers to buy, they naturally say good things about me. Right? It is extremely powerful social proof in the niche. Even if the reader doesn’t end up buying from me, I’ve benefited strongly from all these people saying great things about me.

It is what Jeff Walker has called “the launch echo”.

Guest posting continues to be effective, however I believe that effectiveness is waning in some niches. In the blogging niche, it is waning because guest posting is now so common that readers don’t tend to click on the bio link at the bottom.

The “trick” here is to stand out. A solid example is Derek Halpern, from Social Triggers, essentially “guest posting” on blogs in the form of video blog evaluations. Two things to note here:

Smart marketing, and I’ve told Derek as much in our private chats. 🙂

SEO is effective, of course. That said, it is a lot of work. You have to specifically target long-tail search phrases that people are looking for and where you have a chance to outrank.

I’m not going to get into a whole thing on SEO (it is, in itself a huge topic), but needless to say, done correctly, it draws traffic.

Multimedia works well. Videos hold attention very well. Plus, online video is becoming more and more mainstream as it is now finding its way onto televisions through devices like Apple TV or Roku. Essentially, web-based video is slowing pouncing on the territory traditionally dominated by cable TV stations. And people are USED to sitting there and consuming video. They like it.

Video can also be a double-edged sword. It can still bore the snot out of people quickly and do you no favors. Also, like any web content, a video has to be SEO optimized in order for people to find it.

Podcasting is not nearly as mainstream as video, but it is still a powerful traffic generator when done right. Pat Flynn has generated a lot of traffic from his podcast. While I’ve not done it personally, I know enough about it to relay this advice… iTunes is a search engine. So, your podcast has to be SEO optimized according to the rules of iTunes. So, if you have a podcast with compelling copy, targeted search optimization, good topics… you can pull in listeners. Make it professional and use the platform to routinely pull people to your site for various incentives.

With this one, we’re starting to get into the less effective ways to draw traffic. See, blog commenting works, but it is basically a big game of back link generation. It isn’t going to work any miracles. It takes time, and it takes a LOT of commenting. But, the volume of backlinks can help your search rankings and, in turn, traffic.

The usual rules apply. Make the name field of the comment SEO targeted. And use real, human comments that fit the conversation and not stupid spammy ones.

This one is losing effectiveness, in my view. Some many disagree. It still works, and like commenting, it is basically a big back link game. Some people do article marketing and notice no real effects. Others do it and it has a noticeable effect on traffic. But, Google is smart and they’re not fond of being gamed. So, while this tactic still has some effectiveness, it isn’t the magic pill it was once thought to be.

I’d recommend doing it, but don’t expect it to be a traffic miracle. Do it for back links. And you might draw some people over from the big directories like EZineArticles.

A lot of bloggers overemphasize the traffic generation power of social media. They do it as their primary way of promoting their blog. But, the truth is that it has limited effectiveness when compared to the time demands.

To really draw people from social media, you have to be VERY active. Because you can’t just one-way flow links out there and get attention. You have to actually interact and provoke conversation and that takes time.

For most people, Twitter feels like talking into a sea of noise. Even your “followers” don’t notice most of what you say because of all that noise. It reduces effectiveness.

Facebook has a much higher level of user engagement. But, still, building up the fan base is an uphill climb unless you have other platforms to build inertia from. Your best bet is to get really active in related groups. Also, hold creative marketing campaigns to build up page fans. Giveaways can work. Watch what mommy bloggers do on Facebook. You can learn a lot.

Writing more often can help you a bit when your search rankings since Google loves often-updated sites. But, in and of itself, writing a lot is NOT a traffic generator. For most new bloggers, increasing post frequency to build traffic is just an exercise in frustration.

Simply put, nobody knows about you. So, you’re talking to yourself. So, you have to do some of the other things mentioned above to get “out there”. Go where the people are, engage them, and attract them to your blog.

Have A Traffic Strategy

There are numerous other ways to build traffic that I haven’t even mentioned. Facebook ads, ad swaps, paid email drops, etc.

Most bloggers find traffic difficult because they are always focusing on the low-hanging fruit. And they don’t want to work very hard or pay anything.

The best traffic generators are the ones most people don’t want to do – because it takes more creativity and takes more work.

Traffic isn’t this big invisible force field, oppressing new bloggers. Please, nobody organize an “Organize Cyberspace” protest to protest the oppression of “big evil sites” keeping the little guys down. Nah. Its just a matter of some being willing to do what it takes.