Why so many people end up doing business with GoDaddy, I have no idea. But, of course, I must look in the mirror. As I used to use GoDaddy for my domains. Well, not anymore. Like many who've been in online business for awhile, I owned a lot of domains. Close to 90 of them, actually. I have been meaning to ditch some of them that I realized I'd never use. But, in the process, I've decided to transfer the ones I'm keeping away from GoDaddy. 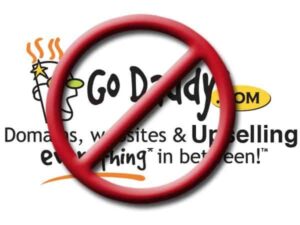 Why so many people end up doing business with GoDaddy, I have no idea.

But, of course, I must look in the mirror. As I used to use GoDaddy for my domains. Well, not anymore.

Like many who’ve been in online business for awhile, I owned a lot of domains. Close to 90 of them, actually. I have been meaning to ditch some of them that I realized I’d never use. But, in the process, I’ve decided to transfer the ones I’m keeping away from GoDaddy.

I’m switching everything to Namecheap. In fact, I’ve been slowly working on this for many months now. But, recently, decided to speed it up and officially walk away. Last night, I transferred 17 domains over to NameCheap. Now, I have almost 30 of them with NameCheap. And I turned OFF auto-renewal on everything which is left in my GoDaddy account.

It was #6 that was the final nail in the coffin and provoked a final mass transfer of my domains to Namecheap. I’ve had  it.

GoDaddy is, from my observation, a company that likes to skate on the edge and create conflict for the purposes of publicity. And, as for customers, turn them upside down and shake until all the money falls out of our pockets. Perhaps they live by the “any press is good press” mentality, but I don’t believe that’s true. A quick comment about this last night on Twitter and Facebook sparked all kinds of responses from friends of mine in the business. Here’s a sample: 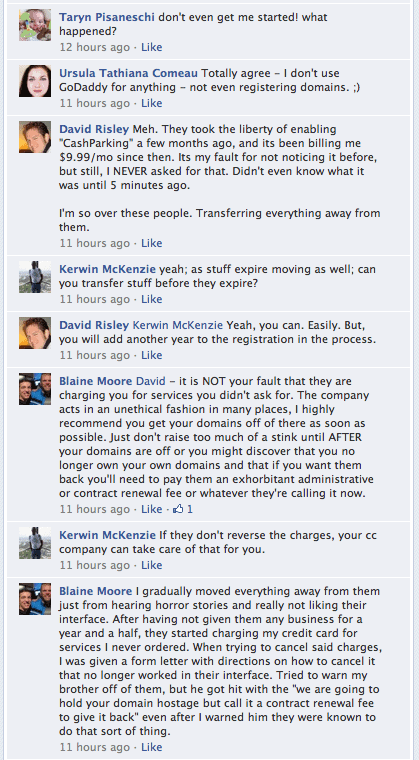 So, the question one has to ask is…. if the people who are IN THE BUSINESS and deal with websites all the time are saying not to use GoDaddy, then what’s wrong here? If you’re not an expert on this stuff, don’t default to GoDaddy just because they advertise alot and use pretty women to do it.

Oh, and as for their hosting – they’re horrible. I’ve lost count of the number of times I’ve heard horror stories about their hosting accounts. Sure, there are those who’ve done just fine with them, but the ratio isn’t great.

Plus, GoDaddy is a domain company who does hosting. It isn’t their specialty. You’d be SOOO much better off getting a hosting account with Hostgator (aff link). I’ve worked with Hostgator, as do many people I know. Their support is excellent. Their servers are solid. And they actually ARE a hosting company, not a registrar posing as one.

I’ll end off with this…

I’m sure GoDaddy has a lot of good people working there. And I also know there are people who have domains or hosting accounts with GoDaddy who have no complaints about their service. And I think that’s awesome. I’m sure the domain registrar business is pretty competitive, and the quest to increase profits can be pretty hard in that environment. However, it appears to me as if GoDaddy has run for the lowest common denominator. Their marketing caters to newbies and people who don’t know any better – and they charge accordingly.

I wrote this as a bit of a rant – but also something that I can refer people to when people ask for my opinion.