Gravity Forms Vs WP Fluent Forms: Which Is The Better WordPress Forms Plugin?

Which is the better Wordpress forms plugin: Gravity Forms or WP Fluent Forms? In this review, we take an inside look at both, side by side. And we determine which one is the better bang for your buck. 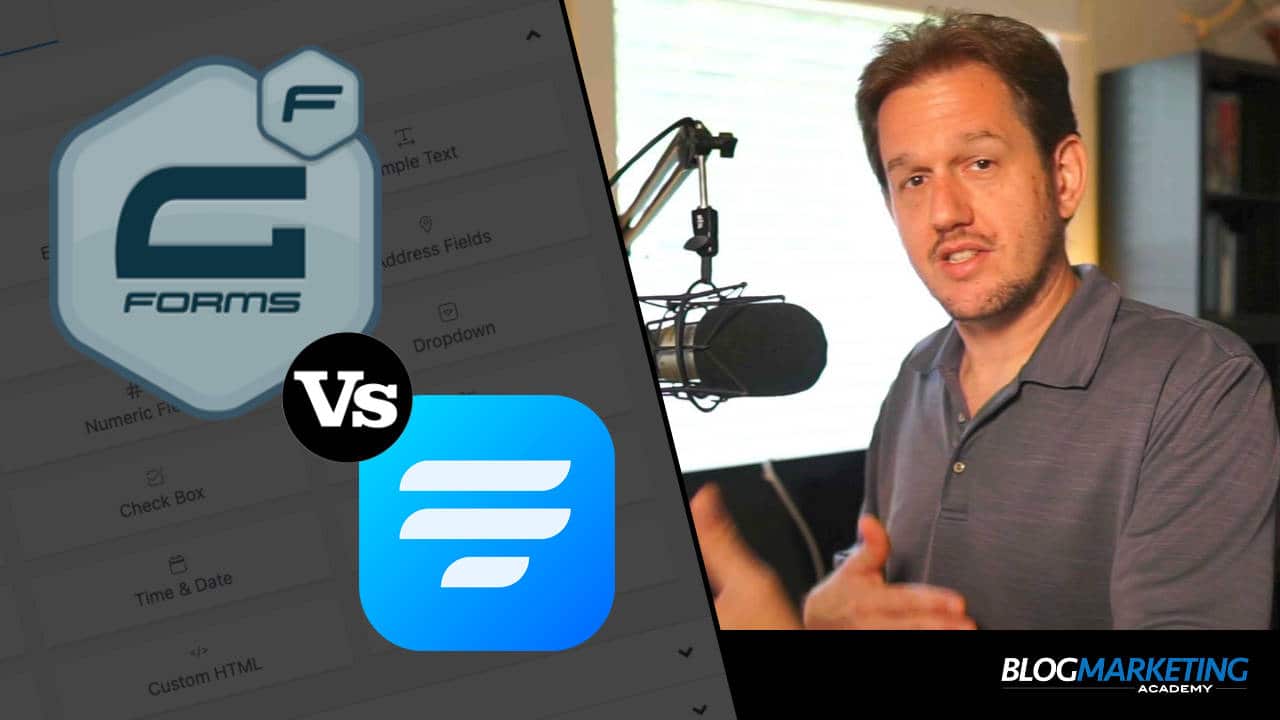 There are a number of good Wordpress plug-ins out there for creating and managing forms.

For quite awhile, I have been using Gravity Forms as my go-to forms plug-in. Gravity Forms has been around a long time and is very well supported.

Other options have come up, however.

Several months ago, I became aware of FluentCRM for a marketing automation platform running on Wordpress. READ: A Look Inside FluentCRM: Marketing Email Automation Inside WordPress

In the process of that plug-in getting onto my radar, I became aware of WP Fluent Forms. The two plug-ins are created by the same company. In fact, Fluent Forms is the default solution for opt-in forms for FluentCRM.

So, how does WP Fluent Forms compare to Gravity Forms?

I have recently changed all of my forms over to Fluent Forms. Why did I make the switch?

Both plug-ins offer a variety of form input field types and cover all the usual options. Both offer the same kinds of form confirmations (on-screen text, page redirect and URL redirect). Both offer email notifications to email the form input where you want.

Both offer management of form entries inside the admin panel.

Now, Let’s Talk About The Differences…

While these two plug-ins do mostly the same things, there are some differences and that’s more important to look at here.

Fluent Forms looks to use it’s own CSS in the admin area. For this reason, the interface just looks a little prettier.

When you’re building forms with Gravity Forms or Fluent Forms, you have a drag-and-drop interface. The Fluent Forms interface, though, seemed faster and easier to use.

Fields on Gravity collapse on the form preview. Sometimes, I’d have fields fail to expand or collapse. Sometimes, I’d get field default values that become “stuck” visually in the browser and not go away. Overall, it just seemed like there were some interface quirks. I experience none of that with Fluent Forms.

Gravity Forms is quite linear in how it designs forms. Top-down layout, one field per row. If you want to position fields in columns or side-by-side, that requires CSS customization and it is a lot more complicated.

Fluent Forms makes it much simpler. It comes with column contains of anywhere from a single column up to 6 columns. Putting field side-by-side is simple drag-and-drop.

Gravity Forms just leaves more of it up to you. You’ve gotta get your “geek” on to really customize a form or look into using some kind of add-on.

There’s a lot of overlap in the types of fields available, as you would expect. However, once again, Fluent Forms simply has more options built-in.

As an example, you can easily do “Chained Select Fields”. This is a few dropdown fields next to each other where the available options in one dropdown change based on the selection in the first dropdown.

Both plug-ins offer a variety of add-ons for various purposes. However, there’s a BIG difference in what you have available to you.

Most of the add-ons for Gravity Forms requires a more advanced (and more expensive) license. Since I only had the base-level Personal license for Gravity, almost every add-on was unavailable to me.

Unless you can find a free plug-in out there to give Gravity Forms the integration you need, you will need a more expensive license to do much.

With Fluent Forms, everything is included.

So, want to do advanced surveys? Well, the Survey add-on for Gravity will require the Elite license at $259/year. With Fluent Forms, surveys are baked in.

Want to integrate your form with Zapier? Or use web hooks to make your forms send data to outside systems? Once again, you’ll need the Elite license with Gravity Forms. With Fluent Forms, it is already included.

Want to build order forms and process credit cards? Well, you get it by now. 😉 You’ll need the Elite license…. or just have Fluent Forms.

Gravity Forms has been around longer than WP Fluent Forms. For that reason, there are more third-party add-ons for Gravity than Fluent Forms.

Gravity Forms has a number of “certified add-ons” from other companies, including:

Also, if you simply search the Wordpress plug-in repository for Gravity Forms plug-ins, you’ll find a bunch of options.

With Fluent Forms, you don’t have nearly so much available. But, there are 2 important things to bear in mind here:

Depending on your specific needs, you may find Gravity Forms offers more options. However, Fluent Forms have most of the same capabilities in different ways.

Which Is The Better Deal?

The answer here is simple: WP Fluent Forms is a far better deal than Gravity Forms.

Gravity Forms has the following licenses:

WP Fluent Forms is an “everything included” license. The different price options are only for the number of sites you can use it on, but you get all the capabilities and add-ons no matter what you do.

Also, unlike Gravity Forms, they also have lifetime plans available:

No matter how you slice it, WP Fluent Forms is the better deal. If you just want a solid forms plug-in for your one main site,  it is $59/year either way. But, Fluent will give you every option whereas Gravity Forms is limited.

And, of course, if you like lifetime plans where you have one larger upfront payment and then you’re good to go, then WP Fluent Forms has that available. Gravity Forms does not.

So, Which Is Better?

Everything is a pros/cons comparison. There is no such thing as “perfect”.

Both of these plug-ins are solid. You really can’t go wrong with either one. But, here’s how I think it breaks down…

Gravity Forms Is Better For…

Gravity Forms has been around longer which means it has more third-party options. Also, it is clearly designed a little bit more for developers.

If you want to use form inputs to power custom interfaces, custom data presentations, then Gravity Forms seems like it has more options. There are also a number of developer hooks and custom functions available so that a coder could go in and do custom things using Gravity Forms data.

If you are looking to do some custom stuff, then Gravity Forms is probably a better plugin for your needs.

WP Fluent Forms Is Better For…

For most sites, I think WP Fluent Forms is a better option.

It is more cost-effective. I think it has a better interface. And it is easier to use. It also includes all the capabilities that Gravity would require a much more expensive license to access.

I like Gravity Forms quite a bit. In fact, I’ve been using it for so longer that I am grandfathered into a license and price point that you can’t get anymore. I’ve only been paying them $29/year. 🙂

That said, I recently picked up a deal on WP Fluent Forms. In fact, I picked up the lifetime license. I figure it is a nice investment into having powerful forms on my sites into the perpetual future.

I have been converting my forms to Fluent. And I like it alot.

Sure, there are a few minor things I’m finding that Gravity does and Fluent forms does not. But overall, I now have MORE capability available to me than I did. I did not hold an Elite license to Gravity so didn’t have all the add-ons. With Fluent, I now have all those options.

So, I’m quite happy with WP Fluent Forms.

I’m sure it’ll come in handy when I switch to FluentCRM, too. 🙂