2 weeks into my project to 10X my blog traffic, here's an update on the traffic stats, my email list metrics, and an epic reduction in my bounce rate (that's surprising). 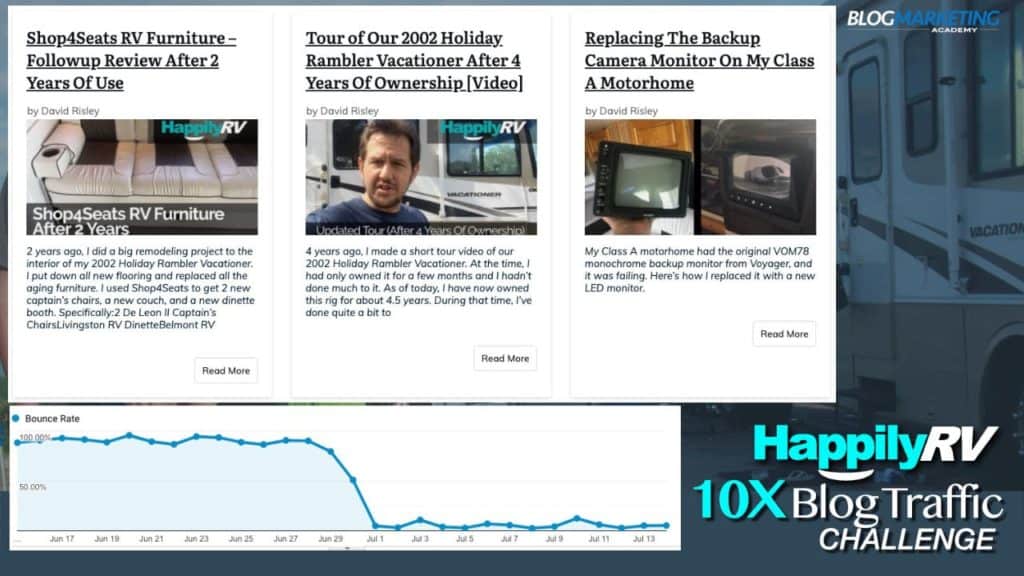 OK, time for an update on my 10X Blog Traffic Challenge, where I am publicly working on resurrecting my RV blog from the dead and increasing it’s traffic up to 1,000 page views per day (average).

As of this writing, it has been a bit over 2 weeks since I announced I was going to do this.

So, where do things stand?

Time Will Always Be A Factor

Just because I’m doing this out in the open (warts and all) doesn’t mean that I’m throwing a ton of time on it. This project remains a “side gig”. I figure that keeps it realistic, too, since so many of you are trying to grow your blog on a limited time budget.

I continue to work on this business right here (the Blog Marketing Academy). I also took my RV out for a couple of nights recently. We also had a health issue arise in the family that definitely sucked up some of my attention.

So, let’s look at what’s been going on, given the limited time I’m spending working on this site…

So, after taking care of some quick tech matters to resurrect the site, I began to produce some new content for the site. Here’s the 3 posts I have published since my initial post where I was breaking the silence:

Each of those posts (which I’m not directly linking to so as not to skew the stats) were combination of video blog and written post. So, each of them had an embedded Youtube video.

The ideas for these posts were just from things people had asked in random emails or Youtube comments over the last year. I have quite a few post ideas that are going to be more general to the niche rather than just updates about my own stuff. I expect I will get more traffic on that future stuff, since it isn’t as if I have a bunch of people who have some personal interest in my motorhome. 🙂 But, it is new material nonetheless.

Here has been my thinking on those new posts so far:

Some Random Things I Am Doing, Too

Aside from new content, I have done some smaller things that some may find of interest.

In terms of the videos I have recorded so far, they are nothing fancy. I simply recorded them on my iPhone.

An Update On Warming Up My Dead Email List

Remember, when I came back to this site after a year, the list had 1,283 people on it. But, I hadn’t emailed the list in over a year.

So, it was time to warm them up…. knowing full well I’d lose people in the process.

So far, here are the emails I have sent to the list…

As of this writing, I have not yet sent out the newest post on the RV furniture.

My first email got a pretty high open rate, most likely because my subject line stood out (It was “I’m not dead.“).

So far, I’ve had 114 people remove themselves from my list (almost 9% of the original list size). Those are the ones who actually took the concrete action to unsubscribe.

But, there’s still quite a few people who were previously subscribed to this list (before June 30) and appear inactive.

That search returns 491 people as of this writing. So, that’s 491 email subscribers that are still there but seem to be unengaged. Right now, I have 1,183 total active subscribers on the list, so 491 people represents about 41% of my total email list.

As of this point, these 491 people are heading toward the chopping block. But, I am not making that move quite yet. My plan here is to send out another update or two to all of them and then re-run this report.

At that point, I will send them through a short re-engagement sequence. Probably only a couple emails. I’m not going to make it a really involved thing.

If they don’t open or click anything during that short re-engagement sequence, then I will be deleting them.

It’s never fun to do that, but necessary. Plus, it is going to kick my open rates up substantially once those unengaged people are removed from the list.

The good news is there’s 692 people on this list who are engaged and still apparently want to be on my list. Not bad after the list being dormant for so long.

Since the site is beginning to pick up steam again, obviously my email list is now growing again.

I took a bit of time to put some some basic opt-in forms on the site using ConvertBox. I now have optins for the same lead magnet in both the sidebar and the post footer. I haven’t done much else with it yet.

This is currently a very 101-level optin strategy. Better than nothing. But, I do have more in mind here.

One thing that I definitely plan to do soon is to set up a simple segmentation strategy using ConvertBox. I am going to ask some simple information such as whether they own an RV or not, what kind of RV, etc. This will allow me to do some interesting things later… as well as talk to people more individually. More on that later. 🙂

Between June 30th and this writing (July 15th), I have put 26 new people on the list. Right now, I seem to be averaging 2-3 new people daily. You can watch over my shoulder while I personally show you how to get set up with ConvertBox and how to implement it in your business. My goal will be to help radically speed up putting ConvertBox to use without having to figure it all out on your own using just their documentation. Plus, I have a whole section on USING ConvertBox to show you some of the coolest uses for your account.

You can get access to this training FOR FREE as a special bonus for securing your lifetime ConvertBox account via our affiliate link. It obviously costs you nothing extra, but I will earn a commission. But, in exchange for your trust, I will hook you up with a full training course and my personal support as you implement ConvertBox.

An Update On Blog Traffic

Here’s a quick snapshot of the daily pageviews to the blog since the beginning of the year:

As I mentioned previously, the site began to see a slow uptrend in traffic all by itself starting in mid-April. I can only suspect this has something to do with changed travel habits due to COVID-19.

But, clearly things have picked up there in the last couple weeks. Here’s a zoom-in of the same data for just the last 30 days…

That first spike was when I began my initial re-engagement. But, overall, my daily average has increased. I’m getting close to averaging over 100 page views per day (I began around 77). My daily high for this range was when I posted my updated tour video, with 210 page views that day.

During this time range, about 70% of my traffic came from search, 17.5% was direct traffic, 9.4% from social media, and the rest if referral traffic.

One interesting thing, too, but my bounce rate took a nose dive.

I mean, that is an epic improvement in bounce rate. That bounce rate was in the 90’s before I did anything – which makes sense seeing as it was pretty obviously a dormant site. But, as soon as I give people an updated site with some new stuff to chomp on, that bounce rate dropped into the single digits. Honestly, I’ve never seen such a fast drastic chance in bounce rate.

So, What’s Coming Next?

Right now, I’m still in the mode of establishing some sort of baseline here. I haven’t put a lot of thought into my long-term strategy for growing the blog traffic.

So, right now, some things I will be focusing on are:

Some potential ideas for later include:

I will also be noodling some monetization ideas. Right now, the goal is traffic. But, obviously if this site is going to be fully utilized, it is going to need to have some revenue, too. After all, that’s sort of what I do, anyway. 😉

So, that’s the update for now! If you have any questions, ask below in the comments and I’ll get back to ya.

Tools I Am Using (So Far) In This Project