In the world of internet marketing, you very often see people price their products with prices that end in 7. $7.... $27.... $97... Why do they do that? Is there some hidden psychological reason for this? The answer is no, and this episode goes into it. 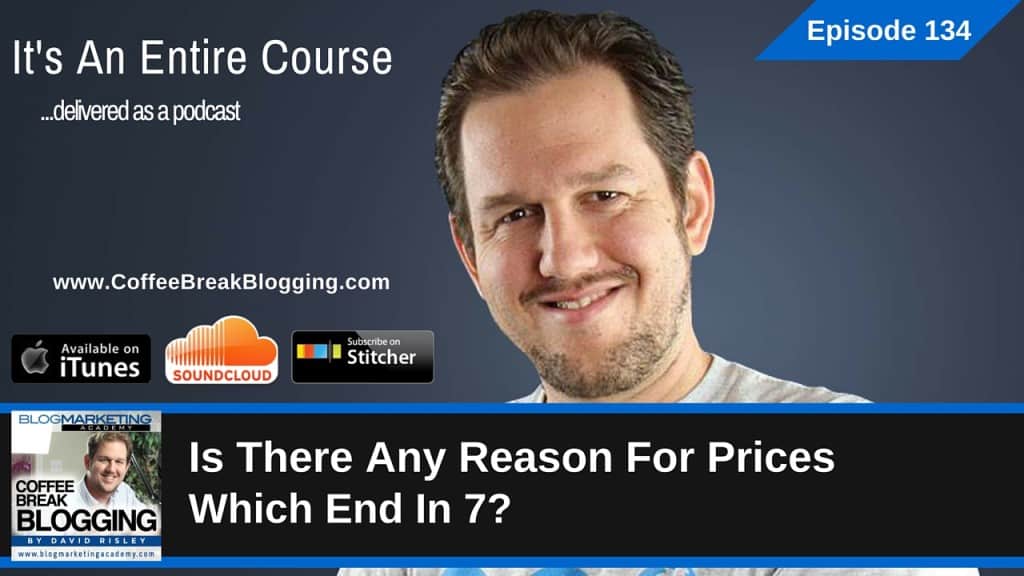 Why do they do that? Is there some hidden psychological reason for this?

The answer is no, and this episode goes into it.

Let’s put this into perspective.

What we are going to be talking about today is going to be kind of informal but it is one that you guys have seen many, many times… And that is Prices that end in 7. Very, very popular in the whole internet marketing world. And you might wonder, is there any reason for it? Is there some deep reason you are unaware of why so many internet marketing prices end in the number 7?

So, here is the thing… It is kind of funny how some things just happen because: “Everybody knows that.” Everybody just kind of knows this “herd” mentality. The thing is, nobody is really being the leader here, but everybody thinks that everybody else is being the leader. And so, it is just literally is a herd mentality when everybody thinks that everybody knows something. And so what happens is it develops into this culture of prices that end in 7. And it is kind of funny; it really is. I have priced things at 7 many, many times. I still have a few prices, some of my front end offers at the Blog Marketing Academy actually are 7 bucks! But I will be the first to tell you, there is really no science behind it. There is not. Believe me, I have done some looking around, I cannot find any actual test results that shows that 7 prices convert better. I have seen no successful split test of any statistical significance that shows that the price that ends in 7 converts better than anything else… And that is just the way that it is.

From the best that I can tell, this goes back to a well-known marketer named Ted Nicholas who kind of have said in one of his workshop that prices that ends in 7 raises sales. Now, he might have experienced that because maybe he did some split testing and he just kind of casually set it, I don’t really know. But from there it kind of have started this urban myth in the internet marketing world where people just started pricing their stuff in 7 and they are like… They get their sales… But nobody really bothered to test it; to see if it really matters. And that is the thing. It is an absolute herd mentality.

I am not going to say that there is not some psychology behind the pricing that you do. For example, if you see $29 versus $30, well it might only be a buck off but there is something psychologically different about seeing a price that starts in 2 versus a price that starts in 3. If you want to ask $300 for a product; if you just go down $1 and charge $299, the price seems cheaper. We are not talking about just a buck; it seems cheaper than even that. And so, there is some psychology to it but at the same time there is number 7; there is nothing particularly special about it. There is really, really not. Outside of the internet marketing world do you see no fascination with this number, by the way.

In The Real World

Now here is a thing to keep in mind… The internet marketing world, for those of us who follow it, it seems like a big world; but it is really not. The internet marketing world is very, very small compared to the big, massive industries that we see out there in the “real world”. I mean, let us look first at the world of infomercials…  There is a LOT of testing that goes into those infomercials because they invested a fair amount of money into the creation of those infomercials. They definitely want them to convert. Now, watch an infomercial. Do you see any fascination with prices that end in 7? Answer = none. You do not see anything like that. And they put a lot of money in the test. Now let us go to into really, really big… There are companies like Walmart. Do you see Walmart having any fascination with the prices that end in 7? Actually they have got a lot of prices that end in 8. And I think it is just to differentiate it with Walmart because I do not think that they done any testing that says, “Yeah, we ended in 8… 98 cents versus 99 cents is going to like, sell better. No, it is just probably a differentiating thing like maybe even a branding play on their part.

Look at Amazon… It is an online business but they sell pretty much everything. And their system does a lot of price testing. It responds practically in real time to demand on thing. So they test a hell out of anything. Now, go to Amazon, look at any particular product that you might be looking to get. Do you see any fascination with prices that end in 7? Absolutely not.

So if you go out into the real world, in the big massive industries; you see absolutely no fascination with prices that end in 7. But for some reason in this world of internet marketing, you see it all the time. I mean, at the end of the day, there is no real harm in it; it is not like you are going to hurt anything by pricing it in 7, but you are also not going to help anything either. The only thing that speaks to the benefit of ending in 7 is tradition, I guess I could say. If you are in the world of internet marketing and the people who are buying from you are also in the world of internet marketing, maybe they are used to seeing prices that end in 7 so your prices are not going to stand out that much if you end it in 7. That is really about all there is to it. But there is not any real testing to back it up.

3 Things To Keep In Mind

Now, when it comes to testing out prices and their effects on conversion; specifically about this world of 7, I want to make sure that 3 things you keep in mind here when it comes to split testing pricing and thinking that you are going to increase your conversion rate based on pricing alone… 3 things…

The first one is the testing the quantity of cents on your price, probably isn’t even worthy, ever. Here is the thing… If you are going to be selling a product and let us say that you have got… Like the price of the Blog Monetization Lab; $29.60. I would want to go and split test $29.50. I am going to get nothing significantly relevant there. I could just tell you that without even doing it. There was really no massive, deep thought that went into that price point. So you got to keep that in mind. There is not going to be some magic number of cents on the end to your price that is going to magically increase your conversion rate. It is just not going to happen.

That goes into my second point… There is no magic number which is going to mystically make people hit the buy button more often than another one. And I know internet marketing people think that that number exist. It is almost like they think that some number is going have some deep, hidden, psychological influence on that; something like, “Duh, you hit the button, buy it” because of the way that you priced it… No, that does not exist. Let us stop fooling ourselves, here. There is no magic number; and even if an internet marketer tells you that there is some magic number ending in 7; just realize they are talking out of their butt.

Lastly, and that is that any incremental changes in your price should be more about recouping your cost of lead acquisition. Now this is a really important point. Because here is the thing… We have not talked about this yet; but if you are going out and running paid traffic from Twitter, Facebook or other such network and you are acquiring leads that way, you are running them into a squeeze page or getting people to opt-in for a free lead magnet, and then that gets them into your sales funnel; very classic stuff and I do this myself with my company. Now, if you run the numbers and you find that an incremental change in your pricing is going to make a difference and you recouping your cost of leads, like getting leads and breaking even on that; then that is a legitimate reason to play around with the cents and maybe even the dollar figure on your price. Because at that point, you are getting your funnel to at least break even it better. And that is important. But in terms of actually increasing or decreasing conversion rate, you are probably not going to find that it makes much of a difference.

Now if you do massive swings in your pricing; that is going to affect conversion rate. I mean, if you change your price by many dollars that could increase your conversion rate. But playing around with the cents… you should only do that when you have got a reason. And I think the only legitimate reason for that is going to be if you find that it makes a difference in paid traffic and making that funnel break even or better. That is the only legitimate reason to do it.

So my final thoughts here about this particular episode is that… No, there is no deep reason for prices that end in 7. It is just some kind of weird tradition that runs in the field of internet marketing. And fairly specifically to internet marketing because you really do not see it anywhere else. Everybody thinks there is some reason for it, but there is simply not. I can’t find any legitimate reason other than tradition for ending your prices in 7. So the only real reason you might do it is so that you can tell the world “Yes, I followed the world of internet marketing and I am kind of copying them.” That is really the only reason to end your prices in 7 versus in 8, versus in 9, versus a 4; it really does not matter that much.

Hopefully that was interesting to you… And I will see you on the next episode of Coffee Break Blogging where we are going to continue talking about pricing your product, specifically how to actually start determining what your price should be. 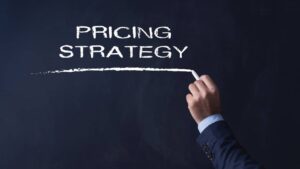 Pricing Strategy: The Non-Marketer’s Guide To Figuring Out What To Charge For Your Digital Products 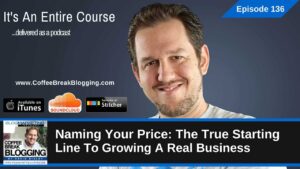 Naming Your Price: The True Starting Line To Growing A Real Business (Episode #136) 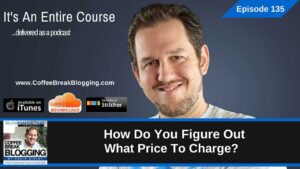 How Do You Figure Out What Price To Charge? (Episode #135) 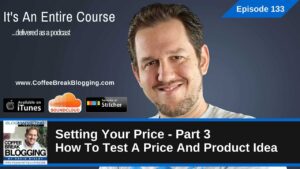