Thrive Automator is now out of beta. It is completely free. And, the way they're doing it could be a game changer when it comes to automation within Wordpress. 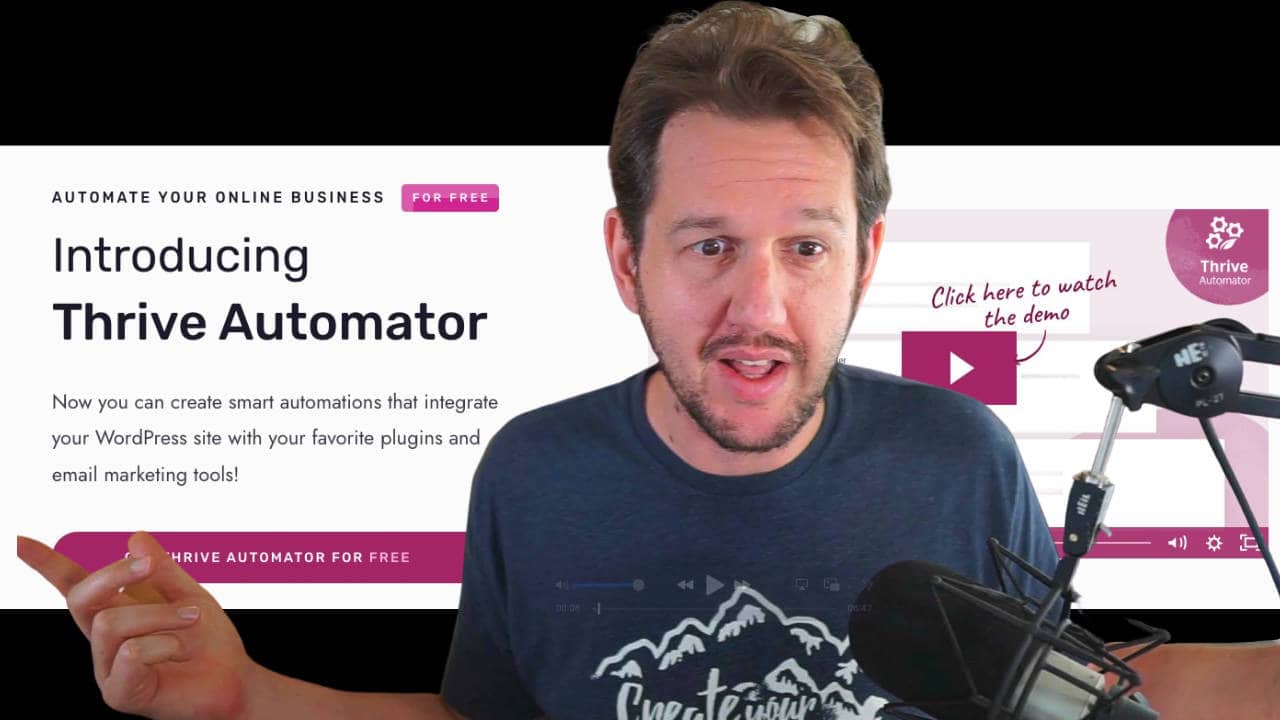 Some time ago, I discussed Thrive Automator. This was shortly after it was released and it was in beta at the time.

Now, it has just come out of beta. This is now a finalized product. And, as it turns out, this is more than just a status change. I want to discuss what this matters… and why it is such an awesome move by Thrive Themes.

Again, What Is Thrive Automator?

Thrive Automator is an automation plugin for Wordpress. It is similar to Zapier in that it connects different pieces of software together, but it does it all within Wordpress.

Think “if this, then that”. So, you could build an automation such as “If user fills out Form X, tag them as a lead in my CRM”.

There are other automation plugins for Wordpress, too. Uncanny Automator and AutomatorWP are both very mature options.

When Thrive Automator came out as beta, it didn’t even hold a candle to those other options. It was quite heavily focused just one Thrive Themes tools and it was pretty limited. But, it did show that Thrive Themes was definitely willing to open up to third parties and that was something I was glad to see.

Thrive Automator Comes Out Of Beta

Now, many months later, Thrive Automator has come out of beta.

A beta period is usually for testing purposes. They’re basically just declaring that “stuff might break and we’re working on it”. So, when a plugin comes out of beta, it is usually just a status change.

But, I actually find this release of Thrive Automator more interesting.

First of all, they’re officially announcing that Thrive Automator is 100% free for everybody.

This means you don’t have to be a Thrive Suite customer to get it and use it. It doesn’t require any other Thrive Suite tools. You are creating a free account with Thrive Themes to get it, so that means it doesn’t appear to be in the Wordpress plugin repository. But, it is free nonetheless.

But, here’s the other thing that’s cool about Thrive Automator…

Thrive Automator Is API-Focused. And Here’s What That Means…

An API is an Application Programming Interface. It is basically a way for outside software to “talk” with another piece of software.

Thrive Automator is fully based on API. Essentially, this means that outside developers are able to build their own integrations with Thrive Automator without having to deal with the Thrive Themes people in any way. This allows the ecosystem to grow without any centralized control by Thrive Themes.

Not only are the integration methods very accessible to developers, but Thrive has done a great job of making it about as easy as possible. They’ve included sample plugins that developers can just modify instead of having to do it from scratch. They’ve also put comments throughout the code to make things super easy.

This is a rather big move for Thrive Themes. It cements the notion that they’re fully committed to opening up the ecosystem and tearing down the walls of their walled garden.

It isn’t as if their approach is novel. Uncanny Automator gives developers methods to build an integration, too. AutomatorWP doesn’t seem to offer any such thing, however it is GPL open source to begin with so technically anybody could do it. But, it definitely does seem as if Thrive is doing everything it can to make this as open as possible.

Without getting super nerdy, I don’t know the relative ease from a developer standpoint of integrating with Thrive Automator versus the others, but it does definitely appear as if Thrive Themes is really going out of their way to make Automator as open as possible to third parties.

Why Thrive Automator Can Eventually Throw Shade On The Others

Look, right now, Thrive Automator still doesn’t have as many integrations as the other two I’ve mentioned. However, it is clear to me that the approach they’re taking with this puts Automator in a position where it could take a tremendous amount of market share when it comes to Wordpress automation.

For one, Automator is free. Not “freemium” where they offer a PRO version with more features, but 100% free all the time. For any number of sites.

Uncanny is “freemium” and you definitely need to pony up for the good stuff. AutomatorWP is free as a core plugin, but you end up paying for the different integrations.

Thrive just comes out and makes it free, unlimited.

So, while Automator doesn’t yet have the same available library of integrations, I’m guessing that it eventually will. And, in due time, it could lead the competitors to need to re-visit their business model.

Other than that, no major changes. No major interface changes from the first time I looked at Automator. After all, the interface is simple enough as it is.

This is just their “swing the doors wide open” moment.

Thrive Automator is out of beta and wide freakin’ open for anybody to use and work with.

As much as I’ve loved Thrive Suite for a long time, I’ve always been like President Reagan yelling “tear down this wall!” whenever it came to integrating with outside systems.