Might be a little counter-intuitive... but the first step to making money online is to stop trying to make money online. Let me explain... 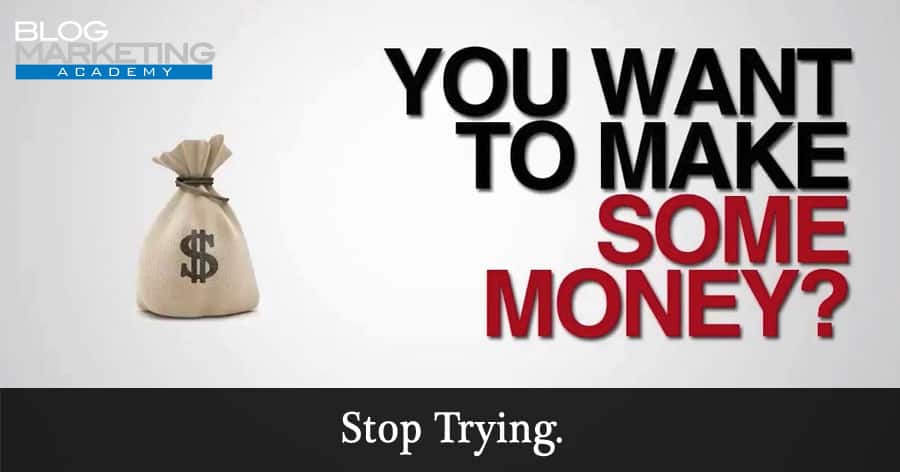 You’d be concentrating on the wrong thing. And not only will you likely not make any progress and easily be misled, but you’ll likely actually repel any success you may have otherwise found.

There are 3 reasons for this. 2 of them are fairly concrete and one of them is a bit “woo woo”, but I’m gonna tell you anyway. 🙂

How To Get All The Money You Want

Money is made valuable by making it more scarce. The more complicated people think it is, the more valuable it will be to us.

Thing is, I also know that the acquisition of money isn’t some secret combination of tricks that only a few have “discovered” (and want to sell you, of course).

Here’s the “secret” to making a ton of money. It is…

Offer something to somebody else which is more valuable to them than the money in their pocket… and they’ll give you their money.

There’s no shortage of money in the world. It is freakin’ everywhere. You just want other people to give their money to you. And you do that by selling them something which is more valuable to them than their money.

So, concentrating on “make money online” is the wrong thing to focus on. Money is a byproduct of creating and selling something to others which they find valuable.

So, the wrong question is “how can I make money online”?

The RIGHT question is… “what can I do or provide to others, via the Internet, that they’ll think is so valuable that they’ll pay me for it?”

Good ol’ fashioned business, right there. Making money online… or blog monetization… is no secret at all. Doesn’t stop people from looking for one, though. About that…

Ooohhh… Shiny Magic Bullet You Got There. Can I Buy Your Secrets?

People are funny. They want mystery. They are attracted to mysteries like a fly is attracted to a pile of poop. And people with their snake oil products know that and take advantage of it like crazy.

If you’re looking for secrets, there’s plenty of folks out there willing to sell them to you. And if you search for “make money online” (which we’ve already shown is the wrong focus anyway), you’re very likely going to find these things and you could very well get taken in by them.

And any training product which is marketed to you on the basis of a lot of wealth promises with little to no work by discovering secrets… run. Run as fast as you can.

Remember Playing With Magnets As A Kid?

I used to get a kick out of playing with magnets. What I thought was particularly fascinating was when you try to connect two ends of the magnets with had the same polarity. What happens?

Its actually pretty cool. 🙂 The magnets will literally try to push away from each other when you try to connect the same polarity.

Funny thing is… it kind of works the same way in life many times. Different causation, perhaps. But, similar outcome.

That thing that you really, REALLY need is the thing that is very hard to acquire. The moment you stop giving a crap, it is easy to get.

It is almost like polarity. If you go for something of the same polarity, it’ll repel. Stop giving a crap (different polarity) and all of a sudden it is easier to attract.

You ever noticed how when you’re really in a hurry to get somewhere by car, all of a sudden everybody is driving slow, every light turns red and its like the world is conspiring to keep you from arriving? I freakin’ HAAATTTEEE that! 🙂 But, if you really couldn’t care less when you get there, its more likely to be smooth sailing.

You may have seen or known people who things just gravitate naturally to. They seem to just have money. From my observation, it is often because they don’t take the subject of money very seriously. They’re concentrating on something different and money is the byproduct.

Now, I know full well that to tell somebody who wants more income that the answer is to stop caring about it… well, that makes no sense. 🙂 Still kind of true, in my opinion. But, quite counter-intuitive, I admit.

So, here’s something more practical…

Up top, I talked about how looking for ways to make money online is a sure-fire way not to make any money online. That’d be a case of trying to jam two identical magnetic poles together… and it’ll repel.

It is really odd how the physical world often works in reverse like this, but it seems to do exactly that.

Give more and you’ll often get more.

Learn how to waste something and you’ll have plenty of it. If you, instead, tend to horde something and hide it away for a later day, you’ll find it harder to get.

If you pinch every penny and are afraid to spend any money at all, you’ll find money harder to acquire.

Great. Then do the exact opposite of what might come naturally to you. Instead, do this….

Inside the Blog Monetization Lab, the entire model is based on creating a value loop. You create valuable stuff based on what your target market needs and wants… and you set up a specific structure to attract them and create that value loop.

Sure, there are mechanics involved – all stuff we teach and do inside the Lab.

But, it starts with creating VALUE. Always has… and always will.