When I first reviewed FluentCRM, I was impressed. Yet, it wasn't ready for me to switch over yet. 7 months later, how has FluentCRM developed? Is it ready now? 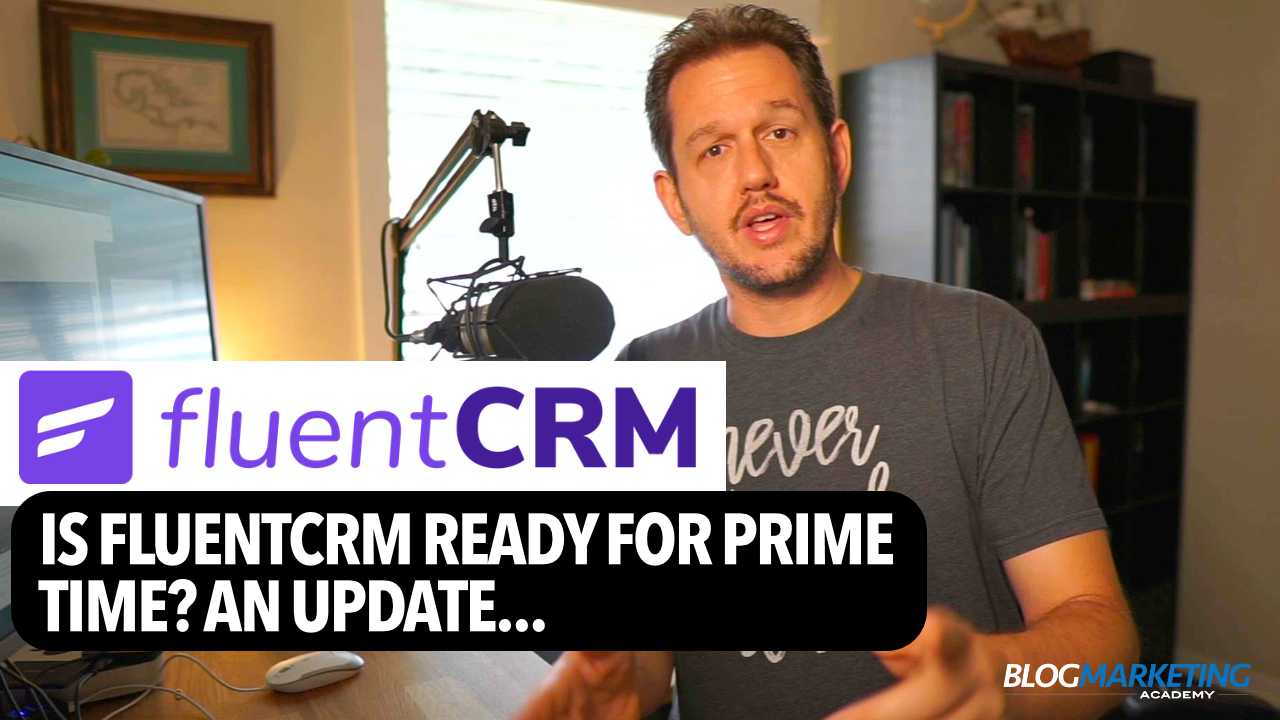 When I first posted my FluentCRM review, I was keeping an eye on it. I had bought it already and I began to use it on one of my little hobby sites.

In terms of the Blog Marketing Academy itself, I was in a “wait and watch” mode.

While I was impressed with how much they had accomplished already, I was clear about the fact that it was not ready for me yet.

I bought it. And I’ve been watching it. I was very clear that I was not switching to it yet because I didn’t feel as if it was ready. My hope is that, eventually, I can move everything into FluentCRM, cancel Drip and save myself over $1,500/year. There’s also a certain elegance and simplicity to having everything “in house”.

To be clear, as if this writing, I am still not using FluentCRM here at the Blog Marketing Academy. I am still on Drip. You can see the tools I use in my business here.

But, how much have things evolved with FluentCRM?

Is it up to a point where I can move my main business site to it?

Why I Would Like To Switch My Email Marketing To FluentCRM

Drip is a really good email provider. I could stay right there and be perfectly fine. However, I would still like to move to FluentCRM.

Well, let’s be honest… cost is a factor. I don’t have any problem affording Drip because my business is in a position where at least 85% of all the revenue is pure profit. My expenses are rather low.

Drip, right now, is costing me about $1,500 per year. It would cost me more now, however I have been grandfathered into an old rate as long as I maintain my annual plan without cancelling.

Broken down by month, I’m paying about $124/month for Drip. Even though I have no problem affording it, switching to FluentCRM would put $124/month back in my own pocket.

I would need to pay for Amazon SES, but it would be insanely cheap.

My sites are backed up automatically every single day and I have a system in place to offload those backups to other services for redundancy.

Drip (like almost every other email list host) provides the ability to export to CSV files, but there is no automated backup process. It is manual and I have to remember to do it.

Not only that, those backups are leads only. It does nothing to back up my emails, my automations, my tag list – nothing.

By switching to FluentCRM, everything is part of the main platform so it is all backed up as one, single unit.

With my current set up, I can trigger any automation I want. Since I use WP Fusion, I have no limitations, really.

There is a certain elegance, however, to having all the automation right there within my site without the need to talk to an external system via the API.

FluentCRM works with WP Fusion beautifully. By using an automation plugin like Automator or Uncanny Automator, I can trigger any number of automations all within Wordpress. Even my video player (Presto Player – see my review) has hooks to trigger automations based on video views.

It really is at a point now where all of the fanciest marketing automation you’d want that used to cost a ton of money to have…. can now be done all within Wordpress. Everything that powers your email marketing engine can be done “in house”.

It is pretty amazing… and convenient.

I actually prefer the contact interface in FluentCRM more than Drip.

It looks better. The way it handles custom fields is way more intuitive. It is just… better.

One of the things I love about WP Fusion is that I’ve gotten to know the developer (Jack) through his community on Facebook. And Jack is VERY responsive. Very cool to work with. I’ve even had a couple of my suggestions implemented into the plug-in by him.

The team behind FluentCRM is quite similar. Shahjahan Jewel is (I assume) the founder of the company behind it. I actually don’t know if he or not, but what I do know is…. he is all over the Facebook groups. And they’re very involved with customers. And it is a much higher degree of interaction than I get with Drip.

With Drip, it isn’t nearly as personal. I don’t even feel they listen to feedback because they’ve made a number of interface changes that just make me cringe (And I know I’m not along in that feeling).

What Kept Me From Using FluentCRM

So, what kept me from using it? Why did I not immediately switch over?

This was a biggie for me. The initial versions of the system did not have decision logic within the automations so that you could do simple if/then logic on tags.

For instance, if the lead has a tag, do one thing…. and if they don’t have that tag, do another.

It was missing. But, it isn’t any longer. FluentCRM now has conditional logic so this is no longer a problem.

​​​​At the time, the amount of integration options for optin forms was limited. Essentially, you had to use Fluent Forms.

Well, much has changed.

Unfortunately, my preferred call to action tool (ConvertBox) still doesn’t officially support FluentCRM. You can still get leads into the system using a web hook, but you cannot use ConvertBox’s tag-based targeting to show/hide things.

Now that I have everything back in one place again, then my members are going to be logged in right here within this site. And that means I still have the same kind of targeting options if needed. I no longer need to rely on ConvertBox to do it.

Clearly, when I first reviewed FluentCRM, it was brand new. The team behind it wasn’t new to the scene, but the product was new. And I figured I’d wait to see how it stands up to usage in the marketplace.

Well, a lot has changed. Many, many updates have been made. And I see people in the community talking about routinely sending emails to their lists which are much larger than my own list.

So, my concern about the platform has certainly gotten much less.

#4 – The Pain Of Re-Building My Automations

I can move my list – no problem. But, there’s no way to export rules and workflows out of Drip and magically import them into FluentCRM.

I’ve got to re-build everything. And I don’t look forward to it.

Now, at this point, I think it wouldn’t be too big a deal. And here’s why…

So, while I’ve been hesitant to tackle it, I think it might not be as big a deal now. I’ve removed a lot of moving parts I used to have. I like simple businesses. And that makes it easier to switch platforms, too. 🙂

So, Here’s Where We Stand Now…

As of this writing, I am on version 2.04 of FluentCRM on one of my site.

We now have conditional logic in the automations…

That was a massive missing feature for me, so it is great to know it is there.

Before, I really need to be able to trigger web hooks within automations because of the separated nature of my sites. I no longer have that problem. However, even if I did, FluentCRM has it handled. The next version of the plugin (which may be out by the time this post is published) is going to have webhook capability built right into automations. 🙂

Moving down the line in my Drip account, as I look at the automations that are active, looking for anything that FluentCRM cannot do… I’m not really finding anything.

I notice that when I update a custom field, I’d love to be able to increment or decrement a numeric field within an automation. This is for my service credit system. It seems I can overwrite the field with a new number, but not add/subtract from the existing value.

While not a big issue, I notice you cannot yet have multiple triggers to the same automation. Drip has no issue with that. I don’t use that much, but it could be handy. You can, though, trigger using multiple tags, so that takes care of most of it.

Some of the features that might be missing from FluentCRM can often be found using an automation plug-in such as Uncanny Automator, AutomatorWP or Thrive Automator. Both options integrate with FluentCRM and both provide a lot more trigger options. For instance, AutomatorWP can increment/decrement a field so that would solve my credit issue above.

As I look, truth is…

There’d be a few differences, of course. That goes with any software change.

Decision Made. I’m Going To Switch

Not immediately, but I’m going to switch.

I’m going to re-build some of the automations on a staging site to make sure I’ve got it figured out. A freakin’ awesome little feature of FluentCRM is that you can export/import automations! Which means, I can build them and test them on staging… then move them over to live without messing anything up.

WP Fusion is hooked into Drip right now. While it will be some work, WP Fusion is perfectly capable of switching CRMs.

I might need to re-design THE EDGE email a bit to make it easier in the block editor. But, I’ll figure it out.

As of this writing, I’ve got (I believe) 6 more months of Drip pre-paid, so I’m not in a big hurry. But, I don’t believe I’m going to renew it.

I like the speed of development of FluentCRM. I like the simplicity of having everything under one roof – and a roof I own and control.

Use coupon code bmamember to save 20% on FluentCRM.

I have been helping clients get set up with FluentCRM as well. When set up properly, it is a very elegant solution. If you’d like my help getting FluentCRM integrated with your site and getting your automations set up, click here to learn how to get me on your team.