Here's how to combine the marketing automation ability of your CRM with users watching videos on your website. 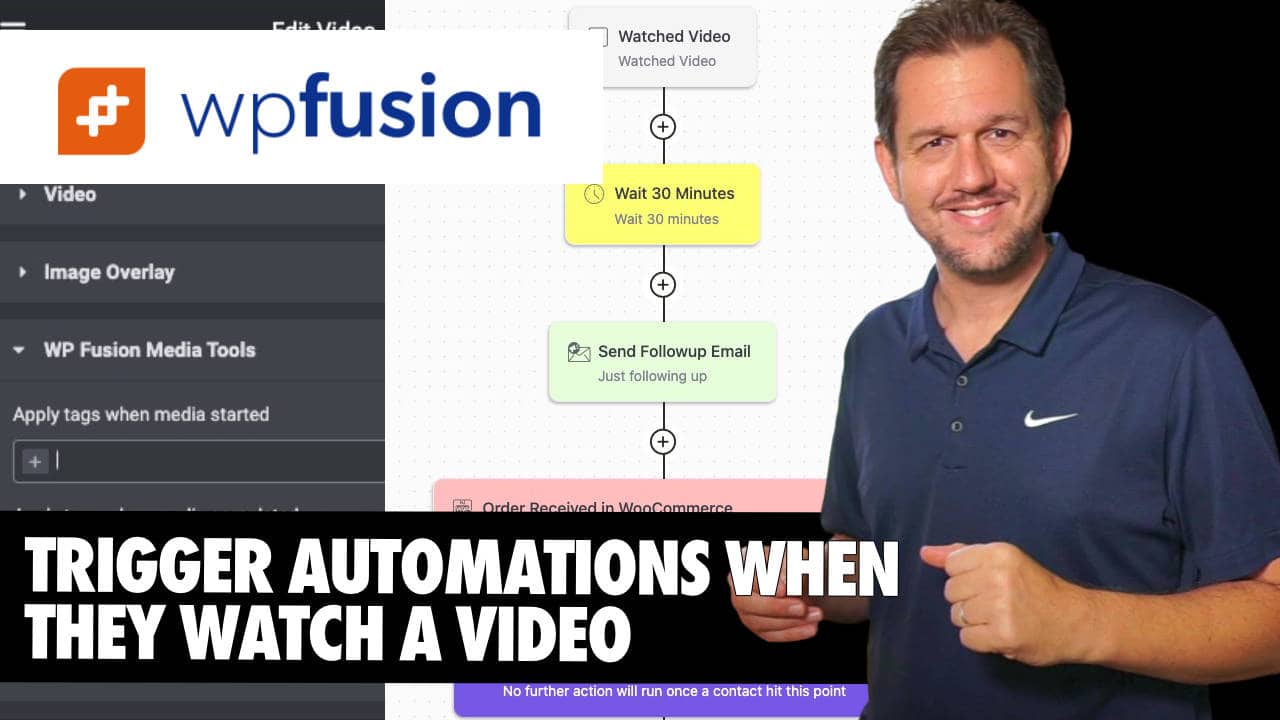 What if you could track the engagement of people on your videos and have your CRM react accordingly? For instance, they might reach a certain point in a video and it automatically triggers an email followup?

Think about the possibilities here…

Let’s say people see the call-to-action in your sales video but do not buy. You could automatically trigger a followup email to them.

Or let’s say you want to require new customers to watch an orientation video before other content is unlocked. No problem.

With the right tools, it is pretty easy to do.

The Tool Needed To Do This…

In order to do this, you need WP Fusion along with the Media Tools add-on.

WP Fusion is my favorite and most used plugin. It’s job is to fuse your Wordpress site with your CRM and it allows you to essentially make your Wordpress site a direct extension of your marketing automation platform. It also works well as a membership site plugin since it can protect any content based on tags on their profile.

My preferred CRM is, of course, FluentCRM (see my FluentCRM review). I love being able to do everything “in house” and manage (and back up) my site in one, holistic package. But WP Fusion works with a ton of CRMs, so essentially this could be done with any CRM which uses tagging. Which is most of them.

In terms of page builders, it works with Elementor. This means you can drag videos into your page with the Elementor builder and control tags right there.

Unfortunately, Elementor is the only builder with direct integration of Media Tools into the interface. For other setups, you will need to use shortcodes. As of now, there is no support for the block editor of Wordpress, so you would need to be using the Classic Editor to access the interface.

How The Media Tools Add-on Works

When embedding media using the built-in player, you can define tags to be applied right in the user interface. Again, as of this writing, this requires the classic editor since it doesn’t yet support the block editor.

If you want to get fancier with it, then you need to begin altering the shortcodes. For instance:

Those numbers are the IDs of the tags you want applied at that instance in the video. You would be using numbers if your CRM works that way… otherwise you could apply tags based on the name.

With Elementor, you don’t have to mess with shortcodes. When you use Elementor’s built-in video widget, you will see a section for WP Fusion Media Tools.

This only works with the native video widget for Elementor. If you use a video widget using another Elementor add-on (such as Ultimate Addons), you will not have this option.

And even though the Media Tools add-on has an integration with Presto Player, that integration is still only on the shortcode level (as of this writing). The attributes for the Presto shortcode are exactly the same as for the native media player.

I asked Jack (the creator of WP Fusion) about adding support for the block editor as it is sorely needed to make this less geeky. I was told they are currently working on it for Presto Player and here’s a mockup of what it could look like when it is ready:

So, as of now, usage of the shortcode attributes is the most reliable way to do this. It is a little nerdy, but it works. However, if you are using Elementor and use the built-in Video widget, you can control all this via the user interface.

Putting This Into Use

So, with this setup, you can add tags to people’s profile in your CRM based on them watching a video. But, how can you actually use this capability?

To do anything, you need to use the marketing automation capability of your CRM. You then use the tag as a trigger to begin the automation.

So, let’s take a fairly common example of an embedded sales video. You want to be able to send them an automated followup email if they started playing the sales video, but only if they didn’t actually buy the product.

Let’s first build out this automation. For our example here, we’ll use FluentCRM to build this.

First, let’s create our trigger tag so we can use it. We’ll call it “Watched Video”. Once that tag exists, let’s go to create an automation. We’ll give it a name and then use the “Tag Applied” trigger.

We’ll then choose the “Watched Video” tag as our trigger tag. Whenever this tag is added to their profile, it will trigger the automation we are building.

We’ll then put on a 30 minute delay. We don’t want to send them an email immediately after they begin playing the video since that’d be annoying. And creepy. 😉

We’ll then send them a custom email. We’ll use the built-in editor to write out email as we want it to be sent to them 30 minutes later.

Then, we want to define a goal for the automation. In FluentCRM, these are called benchmarks. What happens is that if that benchmark is reached, it will kick the user forward to that point in the automation. So, we’ll set a benchmark for receiving an order in WooCommerce for the product. The effect of this is that if the viewer purchases the product within 30 minutes of hitting Play on the video, they will never receive a followup email.

Then, to wrap it up, we’ll just end the funnel. The final result looks like this:

This is a very simple automation. It could very easily be “fancied up” if we wanted.

For instance, we could put in a conditional so that if they are already tagged as a customer of that product, we just skip the whole thing. This way, if existing customers happen to watch the sales video, we don’t bother to follow up because that would be redundant.

You could also use any capability that your marketing automation platform provides. Want to send a webhook to an outside system? No problem. Add them to a Facebook custom audience so you can retarget them with an ad? Sure.

Using the same kind of system, you could set up automations for any number of scenarios.

You don’t even need to be using WooCommerce, as in my example above. Even if you were using a third-party shopping cart, you could do the same thing. Instead of using the built-in WooCommerce integration with FluentCRM, we would just set a benchmark for the application of the customer tag. When that tag is applied, it skips ahead in the automation just the same.

Are There Other Ways To Do This?

WP Fusion is how to do this with Wordpress. This is the way I prefer it personally because I like to fully own my own platform and not be reliant on third-party, hosted platforms.

Wistia has some ability to integrate with third-party CRMs. They’re pretty limited on what CRMs they can do this kind of integration with, however.

This kind of capability would almost require a full-stack, integrated website builder and CRM all in one. This is because the system would need to know who they are as they watch the video to be able to properly apply a tag. Very few platforms have that option. Hubspot is one.

WP Fusion is unique in that it is able to accomplish this fusion between a platform as open as Wordpress and almost any CRM on the market. This makes it a very accessible function. Otherwise, you’ll be in the hands of some proprietary solution.

I did some looking around and I found very few alternatives to this which are so accessible. It is possible I missed something, though, so if you happen to know of other options that provide the ability to tag people based on activity in a video player, let me know. 🙂

WPFusion is the “swiss army knife” for any marketer who uses Wordpress. The amount of things it enables you to do is simply astounding.

One other final thought….

Just because you can do something doesn’t mean you need to. 🙂

Marketing automation tools like this open up so many possibilities that it can be paralyzing. And it would be really easy to go on an automation spree and try to track almost any video they watch and have all kinds of behind-the-scenes fancy-pants stuff going on. But, always ask yourself…

Is the result I’m after actually important? Do you really need this kind of tracking?

If the answer is yes, then do it. If such an automation is mission-critical or you think it would be a major addition to your conversion rates, then build it. Otherwise, perhaps don’t worry about it. There are usually enough moving parts to an online business platform already without you feeling like you’re supposed to build fancy automations for every sales video on your site. 🙂

Want some help setting up these automations on your website? I can do it for you. Learn how.