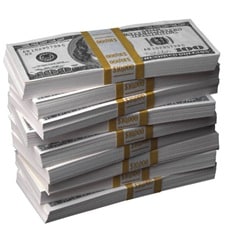 A guy wants to open up a store. He is tired of his regular job and wants to do something different.

He reads a lot about stores. And then jumps right into setting up a store. He puts the shelves in there. He buys one of those big glowing “OPEN” signs. He makes everything all pretty. He looks forward to those hoardes of people who will, of course, come by to check out his pretty store.

Let’s say he even gets people to come in. He has the place all decked out. And he’s happy that he’s getting a little bit of foot traffic each day.

Then, one day, he sits down. And he asks…. “HOW AM I GOING TO MONETIZE THIS STORE?”

When Steve Jobs and Wozniak started Apple, they didn’t ask themselves “How am I going to monetize Apple?” They didn’t build computers, THEN try to figure out how to “monetize”.

When Sam Walton started up Wal-Mart, he didn’t open up his first store then ask himself how he was going to monetize.

“Blog monetization” is a buzzword phrase in this space. And, as a blogger in this space, I’m basically forced to play along. It is the language of the marketplace, after all.

Because it means that you start a blog, do all this work to build something up, then figure out how to make money with it. It means that money is an afterthought. It means you didn’t give an ounce of thought into your business plan before you started the blog.

Monetization is for business light-weights. It is for the unserious. It is children’s playtime. It is for hobbyists.

Blog monetizers waste a lot of time on things which don’t matter all that much (like Twitter for hours per day). They waste time on low ROI activities. They dream about making a full-time income from their blogs. But, chances are, they won’t make it. Because they’re trying to “monetize”. They’re not building a business.

So, I’m not saying any of this to rip into you. I know a lot of my readers are trying to “monetize”.

But, I’d be doing you a disservice if I pussy-footed around this “blog monetization” thing and didn’t tell you the cold hard truth. There are a ton of other blogs on this topic who will do that for you. If you’re a dreamer, go read those guys. Once you realize you’re on a dead-end, remember, I’ll be here.

I think you are, too. But, it starts with you deciding you are.

How To Use ConvertBox To Engage And Segment Existing Subscribers