To get very far in this business, you need to build up KLT. That's Know, Like and Trust. This means... building up traffic, getting them engaged, and building authority.

And we don't just want any traffic. We want the right traffic. The right kind of people who are interested in what we're doing and might be ready to take some action toward the things they want.

Traffic Generation: The Ultimate Guide To Building Your Blog Traffic, Predictably And Reliably

How do you get blog traffic? How do you generate traffic when you’re first starting out? Which strategies are more effective than others? This guide goes into it – in detail.

Ultimate Blog Promotion Guide: 10 Smartest Things You Can Do to Promote Your New Blog (UPDATED)

The ultimate guide to promoting your new blog. We cover 10 specific (and smart) strategies you should use immediately to promote your new blog effectively.

How do you get more traffic to your blog? It feels like a constant battle sometimes. It is important for blog owners to think more holistically about traffic. It can't be merely about SEO and sharing on social media. The world is increasingly "pay to play" now and that means we also need to be able to use paid traffic.

How Often Should You Post To Your Blog For SEO?

Instant Authority: 5 Simple Strategies To Becoming A Leader In Your Niche (Without Depending On Others)

Which Comes First: Traffic or Monetization? (How Everything Has Changed)

The fuel for building your traffic is, of course, your content. And the last thing I would recommend is to "wing it". For your blog to serve as the powerful sales generation machine that it can be, it needs to be populated with content strategically created and maintained to fuel it.

The Redwood Strategy: How To Get Massive Traffic To Your Blog With Strategic Repurposing (UPDATED)

Blog Comments in 2019: Should You Still Allow Comments On Your Blog?

How To Do A Blog Content Audit (Without Nasty Spreadsheets). My Custom System For Managing Content In WordPress.

58+ Headline Formulas: The Ultimate Non-Copywriter’s Guide To Writing Headlines That Get The Clicks (UPDATED)

Training From The LAB Library Here’s how to step off the rat-wheel of date-based blogging… and into systematic and strategic approach to content that drives revenue. An Easy-To-Follow Guide For How To Take Control Of Your Online Business Destiny… Using Facebook Advertising. Learn the strategies to turn your blog into a strategically designed content marketing environment, primed for conversion.

Branding 101: How To Brand Yourself, Your Business or Your Blog

7 Strategies For The Perfect About Page (With Template and Examples)

There is a cold hard truth that isn’t going to be very pleasant to a lot of bloggers. And that is…

It is a very, VERY steep uphill battle to grow your blog’s traffic these days by blogging alone.

Of course, I’m guessing a large number of you have seen this in your own traffic stats so you know it is true. If you start a blog and put out your best stuff, it doesn’t mean jack crap when it comes to getting any traffic.

The primary traffic growth strategy used by most bloggers is social media sharing. But, once again, you’re in for a major uphill fight going that route. We are increasingly in a “pay to play” environment these days when it comes to social media, and most bloggers are trying to do it all for free.

It can be pretty disheartening.

It can be pretty rough out there for bloggers who think small. You’ve got to think – and play – big if you want to make a larger footprint these days.

Blogging and sharing alone isn’t going to do it anymore.

I personally think there are 4 main prongs to growing your traffic effectively. And I say “traffic” not just in the sense of anybody who will fog up a mirror. I’m talking about the right kind of traffic.

For many of us, it doesn’t take much convincing to realize that blogging is important. However, there are still many who disagree. There are a lot of businesses out there whose owners still view blogging as a waste of time.

The effectiveness of traditional advertising is in the toilet. Even banner ads don’t work very well anymore as most people just visually tune them out. So, from an online perspective, the kind of advertising a lot of people are heading into is on social media and search.

Well, in case you haven’t heard, Google has long since clamped down on pointing your Adwords ads to squeeze pages. The very lifeblood of your business is leads, and you’re not allowed to use Adwords to point to a page which asks for the lead. What they want you to point to is a content page.

I’ve heard Facebook is making the same change. They don’t want you directly pointing to squeeze pages, or video sales letters. Basically, they are trying to preserve the user experience which means that the ideal place to point your ads to is… content.

Now, this is going to dovetail very tightly into my 4th point (see below), but the point is…

Any complete content marketing strategy has to include video. I could parrot out a bunch of stats at you at how popular online video is, but I think you already know that.

If the channel is that big, you want to be on it. Plus, video allows you to build a relationship with your prospects (or readers) that you’ll never be able to produce with the written word alone.

I should also mention that, under this heading, I include all forms of video. That includes traditional video as well as live video (i.e. Lives or webinars). This kind of content has high engagement and, from a sales perspective, performs.

Podcasting is huge right now. The stats are quite impressive. But, aside from all that, podcasting has this unique advantage over both blog posts and videos…

It is mostly distraction free.

Think about it… what other major form of media is typically consumed while the person isn’t otherwise distracted? With blog posts, most people scan the things because they’re too lazy to read it. With video, their attention spans are so short than you have to keep the thing mostly under 3 minutes (unless you’re seriously entertaining).

With podcasting, people usually listen when they are AWAY from their desk. That means less distraction. You’re literally burrowed into their ear canals for the length of your show. How awesome is that?

Now, I’m guessing that, to many of my readers, this one is new. First, let’s define it…

Native advertising is paid advertising which fits the environment in which it is found. That’s it.

So, for Facebook, you have sponsored posts in the news feed. People pay to place those things there, and when you click on it, you are typically taken to some kind of content. End-to-end, this is “native” in that it follows suit to what Facebook is used for. Facebook is used to keep up with friends as well as discover new content. So, you write native-worthy content, you place it on Facebook using boosted posts or sponsored stories.. and you get some traction.

So, the big question is… why should we, as content creators, be worrying about paid advertising?

Because this is simply how the game works now. These social media sites are essentially “pay to play” now. It is much, MUCH harder than it used to be to get your message seen on these networks unless you pony up. Not only that, because (currently) a lot of people are still trying to do it the free way, that means you have less competition for eyeballs once you go paid. (Hint: That’s gonna change, too.)

Bringing It All Together

Essentially, if you bring these 4 prongs together, you’ve got yourself a deadly quartet. The result is traffic and leads. But…

You’ve got to do it smartly.

Obviously, if you just start throwing money at native ads without any kind of monetization strategy on the backend, you’re just burning money. You don’t pay to send people to your typical blog post with no call to action.

If you look up, this site is called Blog Marketing Academy. That’s because I firmly believe that blogging (and, under that umbrella, I include all forms of content creation) is a POWERFUL form of marketing. You are helping people with your content, then guiding them into their next step using a call to action.

That call to action should, in some way, lead to a revenue opportunity. And that’s how you justify the ad spend on native ads. 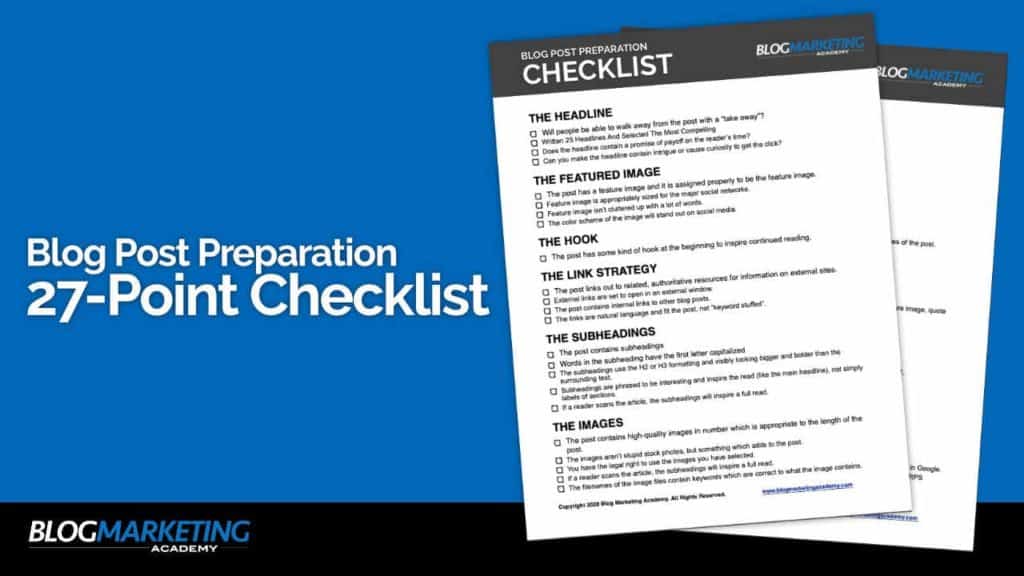