Some real talk about why so many bloggers recommend Bluehost and Hostgator. Here's something you need to know, and why I do NOT recommend these companies to my readers. There are a lot of bloggers doing that. You know several of them if you’ve been around much. Some of the guys doing it have big names you may have heard of.

And they may do it with completely honest intentions. Or… it could be because of the fairly sweet affiliate commissions. You just don’t know.

But, many months back, I had to make an executive decision.

Continue to recommend the hosting company who paid me the highest commission? Or switch it up and recommend the people who I think are truly better.

Well, after I got hacked on Bluehost, I chose the latter.

My commissions aren’t as high, but I can sleep better knowing I’m serving my readers better.

So, let’s do some real talk here…

EIG is the parent company for a lot of hosting companies. And there’s a reputation in the industry that when EIG takes over a company, the quality drops.

Being that it is the same company, they use shared resources and shared support agents. If you’ve had a bad experience with one of their support people with one “company” then switch to another one, you may think you’re dealing with different people. But, you’re not.

I know many people personally who said that both companies were great… until EIG took over.

But, EIG controls a ton of brands… 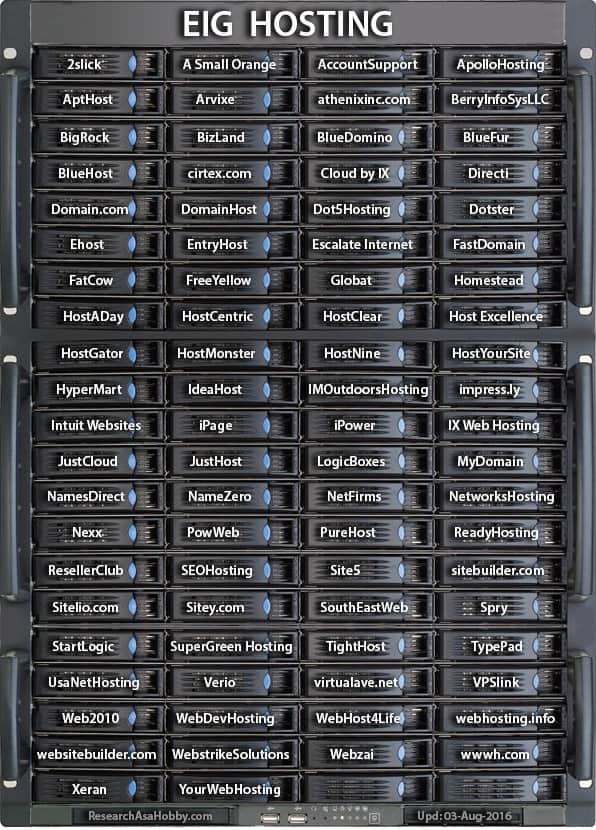 Essentially, if you use any of these brands for your hosting, it is all the same company.

So, Is EIG All Evil Or Something?

Of course not. I’m simply giving you my opinion.

A large conglomerate like this turns hosting into a commodity. They use bulk servers and outsourced support agents. It is a big game of numbers.

And my own personal experience dealing with the support people of both Hostgator and Bluehost bears this out. I was getting stock answers from what was obviously just some process flow diagram for their outsourced support people. It wasn’t helpful. Their “solutions” weren’t solutions at all. Perhaps I’m more in a position to know than many since I have an IT background.

Plus, there are numerous stories of sites getting hacked on EIG servers. Not that other hosts are immune to such things. However, the way a company deals with it says alot. And my own personal experience with a site getting hacked on Bluehost left a lot to be desired.

One of the strategies of EIG is to offer highly attractive affiliate commissions to entice people to go out and say great things about them. They can justify these numbers because moving a site is a hard thing to do, so most people won’t move it. This makes the lifetime customer value high enough to justify these high commissions. There are bloggers out there generating $100-$150 per signup to refer people to Bluehost.

Then it can become incestuous because you’ll have bloggers blogging about these affiliate programs and inspiring more people to hop onto the bandwagon.

EIG can do this because they have the capital. Many web hosts have nice affiliate programs, but EIG is able to offer top-rung commissions because of the scale they operate. But, their service quality doesn’t justify the recommendations, in my view.

Surely, there are a number of people out there who are perfectly happy in these hosting accounts. I take absolutely nothing away from that. I mean, it isn’t as if EIG is lying here and I don’t want anybody to get that impression.

But, they are not the best game in town.

My Recommendations For Your Hosting

I would make more money if I just pimped Bluehost at you. But, it would be like me recommending to go to Wal-Mart to receive a high level of customer service. 😉

For the last year or so, my official recommendation for hosting has been SiteGround.

If you want specific Wordpress-focused managed hosting, I am a huge fan of WPEngine.

And if you are big enough to need a full dedicated server, I would recommend LiquidWeb.

Siteground Web Hosting – And Why

If you look on the image above, you’ll notice one name missing…

They are their own company and not owned by EIG.

Their hosting quality is top notch. Their support people actually know what the heck they’re doing, are in-house, and trained in-house.

Their hosting options are highly flexible, so you can actually get started with Siteground and they’ll grow along with you. They have fully managed Wordpress hosting, just like WPEngine. However, it isn’t as expensive.

They will also set you up with a domain for free… AND help you transfer your site from your previous host for free.

Lastly, when I first publicly announced that I was switching my recommendation, I was not personally using Siteground. Today, I am. Now, the Blog Marketing Academy is hosted on WPEngine and they’re great. But, I have some smaller stuff with Siteground. I have one more thing still on Bluehost, but I will be moving it and canceling my Bluehost account.

Buyer Beware When Shopping For Hosting

Web hosting is a very competitive business. And affiliate marketing is a major driver of business for most of these guys.

And there are a lot of people out there chasing that money.

The higher the commission being offered, the most glowing reviews you will find. But, they’re not always honest reviews. Even if the writers of those reviews aren’t lying, they’re still human. They’ll have that confirmation bias and they will see the good things because they WANT to see the good things. Those commissions talk. 🙂

So, if you make the rounds out there on other blogs about blogging, you’ll find Hostgator and Bluehost are often recommended.

But, I’m calling it like I see it… and like my own personal experience has shown me.

These companies aren’t the best out there. They’re EIG companies. And most of those recommendations are driven by the quest to monetize their blogs.

That’s my real talk for you.

This is my opinion, obviously. And I cast no shadow on anybody out there recommending these companies. I know many of them and they’re good, honest people.

I just can’t follow along and keep my integrity.

If you want specific Wordpress-focused managed hosting, I am a huge fan of WPEngine. This is where the Academy is hosted.

And if you are big enough to need a full dedicated server, I would recommend LiquidWeb.