It was a beautiful, clear morning as we pulled away from the marina in Clearwater, Florida. There were at least 10 of us on board. We had met out there at the marina in order to go offshore about 20 miles and go diving. I arrived with my big pile of diving gear that I bought for myself after I completed my certification. A brand new BC, regulator with auxillary (often called "the octupus" as a slang), even a dive computer. I didn't really know where we were going, exactly. I was going with some people from my diving group as well as the instructor. I knew it I would get wet...and that's about all I knew. 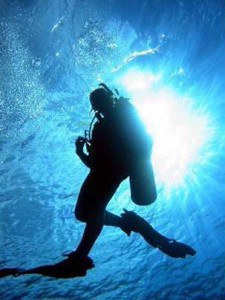 It was a beautiful, clear morning as we pulled away from the marina in Clearwater, Florida.

There were at least 10 of us on board. We had met out there at the marina in order to go offshore about 20 miles and go diving.

I arrived with my big pile of diving gear that I bought for myself after I completed my certification. A brand new BC, regulator with auxillary (often called “the octupus” as a slang), even a dive computer.

I didn’t really know where we were going, exactly. I was going with some people from my diving group as well as the instructor. I knew it I would get wet…and that’s about all I knew.

After a long ride and some definite anticipation, we arrived on the site. There were a few boats around, but we were out of sight of land. There was a big mooring ball out there which was the marker for what was below – a boat wreck.

It was in about 80 feet of water – out in the Gulf of Mexico. It was a little out of my comfort zone at the time. I was a new diver. I was ready for the experience, though, and I had the support of the group.

I Took The Punge

So, I put on my gear as did everybody else. I had to remember to connect the SCUBA gear up correctly. Weights? Check. Air flow? Check. Adequate air pressure? Check. Spit in the mask… a little trick to keep it from fogging up. 🙂

Then, one by one, we jumped overboard. All the weight of the SCUBA gear instantly lightened up.

Now, here is where that group support came in handy again…

Even more freak out…. the anchor line of the boat simply went into the green darkness downward and disappeared.

So, we made our way downward by going hand-over-hand down the anchor line…

Down to a sunken tug boat. And it was cool as hell. The water down there was actually pretty clear. We dove into the wreck a bit. I even visited the bridge. An amazing amount of life had grown on the boat. It had turned into an artificial reef, in a way.

After the dive, we all chilled out on the boat. To wash the salt water taste from the mouth, I of course had a beer. 🙂 Good times.

There was a great comradery on the boat on the way back. Just really fun times.

So, What’s The Business Lesson In This?

I would never have had the cajones to do a wreck dive were it not for the group I was with. Even though many of them felt the same, we backed each other up. We encouraged each other.

It isn’t that a wreck dive is a weird or dangerous thing, but it was for me. I had a little bit of my old childhood fear of deep water still in me and I had to get over it.

It is very much the same in business. Surrounding yourself with like-minded people is a powerful thing. They can back you up and act as mental support. They can help you see things that you may not see for yourself.

And with the group, you find that you are more willing to confront things than maybe you wouldn’t be if you were alone.

I’ve been involved in various mastermind groups for the last few years, and I don’t think it is any coincidence that my business has gone through the highest growth period in the same time. Online business can be a lonely business, by its nature. Plus, I can’t possibly keep up with everything. So, mastermind groups and a support group of peers has been invaluable. We bounce ideas off each other, give fresh viewpoints on each other’s businesses, etc.

Trying to expand your business to the next level can sometimes feel about the same as diving into deep water where you can’t see the bottom. You don’t know what’s ahead… but you follow the line and see where it leads. And it is best done with others.

So, I encourage you to get involved with like-minded peer groups. Put together a mastermind group. Check out Meetup.com and see about joining some there.

You can also consider joining the Inner Circle, since this is one of the primary points of the group. 🙂 This week has been awesome inside the Inner Circle. You’re really missing out if you’re not in there. We even just started up a private Facebook group to help the instant communication between members.

In diving, you never dive without a dive buddy. Why try to embark into business waters alone? Use the buddy system.