I decided to test a boosted post on Facebook for my blog. Here is what happened - both the good and the bad. And lessons learned. 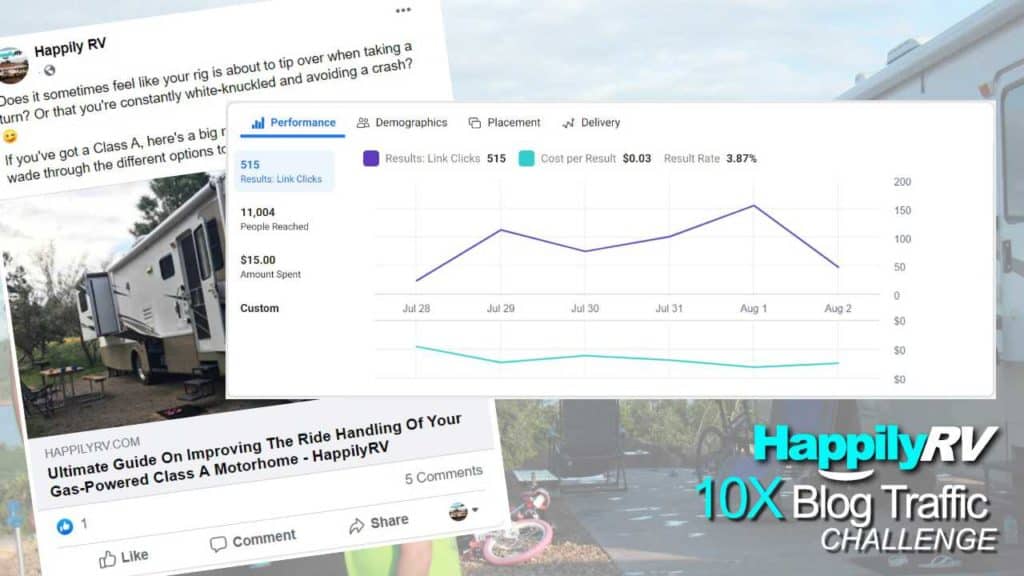 So, I set out to 10X the daily traffic of my little side blog that I do just for fun. That blog is in the RV niche and it is called HappilyRV. You can keep tabs on everything by being subscribed for the 10X Blog Traffic Challenge.

Now, my last update here on the site was about 3 weeks ago. What has happened since?

I had let this blog die for over a year without any new content at all. So, one of the things I am working on here at the beginning is just getting into a pattern of posting something with some kind of regularity.

Right now, I am shooting for a once per week blog post schedule. Not because that is some kind of ideal, however. Mainly because I’m not exactly floating on time here. 😉

First up, I decided to try out a redwood post. For more on The Redwood Strategy, you can check this out. It is basically a big pillar post and one that is aimed to be a reference piece that we will circle back to and keep updated over time.

So, that redwood post I created was the Ultimate Guide On Improving The Ride Handling Of Your Gas-Powered Class A Motorhome.

I also wrote a post about how COVID has affected RV ownership…. and another on the best speed to drive an RV.

So, this is all well and good. But, we all know that simply writing blog posts and publishing them doesn’t do a whole heck of a lot to grow our traffic or email list.

So, I tried something out…

Now, when I started this challenge, I told you that I would share everything. Warts and all. I figure that’s part of how people learn is to see everything.

It worked VERY well…. and yet not that well at the same time. But, I know full well the reason. And I’ll tell you. 😉

First, let’s back up…

About 4 years ago when I first started this RV blog, one of the most effective things I did was to set up a Facebook Ad to one of my redwood posts and just let it run. At the time, I was able to drive traffic to the blog at 11 cents per click.

I also had a nicely targeted opt-in on that blog post, so I was growing the email list fairly effectively. As the numbers worked out, I was putting people onto the email list for around $0.83 each.

Using that method, I was able to take my fairly tiny little RV blog and build up an email list of over 1,000 people. But, surely, I paid for it. While effective, it isn’t something I would want to rely on long-term since the blog was not monetized and I was basically just farting away money. I spent a total of about $708 on that campaign.

How effective would a simple boosted post be today? Would it still be affordable?

So, I started by simply creating a post to my Facebook Page. I can’t say I put a ton of thought into it. Here’s what it looked like… 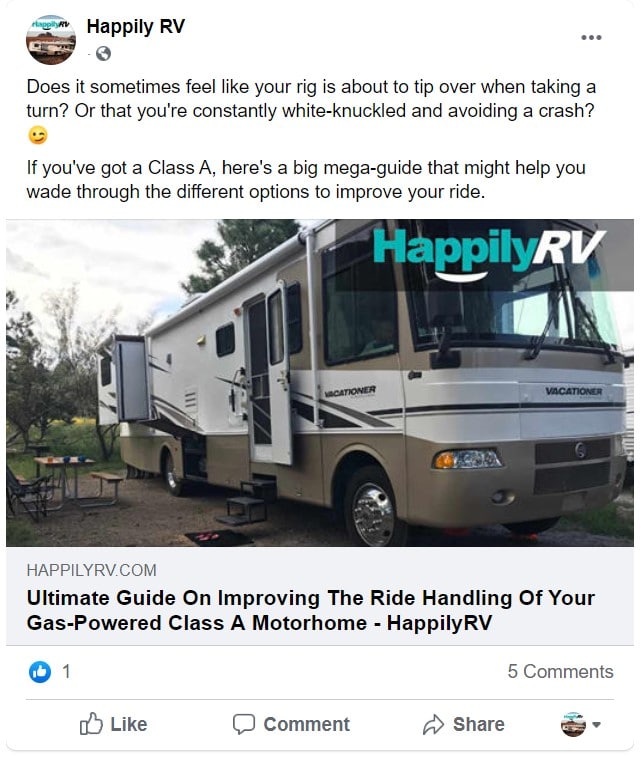 I chose to boost this post to people who I target, not my own page. I was specifically trying to reach new people here. The criteria I chose were:

Here are the results:

I was quite happy with these results for obvious reasons. I was driving clicks for only $0.03 CPC. That was significantly less than what I experienced last time ($0.11 CPC)… and I was fairly happy about it then!

A few points of interest…

OK, so far I told you the good part. I ran a simple boosted post and drove over 500 clicks to the site for only $15 for an insanely low CPC.

But, did it result in anything?

Well, not really. I mean, it boosted my traffic…

The lines show the period where I was running the Facebook campaign. So, certainly it did give me a spike.

Well, when I go check on the stats in ConvertBox, I can see that the opt-in forms loaded up more during that period, as expected… … but did NOT result in any real lead generation…. In fact, clearly I have work to do on the opt-in conversion rate no matter what. I’m only putting 2 people (on average) on the list per day. Which isn’t too bad considering the average daily page view count. But clearly, the Facebook ad didn’t move the needle at all when it comes to opt-ins.

So, what happened here?

Actually, it isn’t that hard to figure out here.

A few years ago when I did this, my opt-in was tightly targeted to the blog post. I was using a blog post about inspecting a used RV before purchase… and the opt-in was a downloadable version of that same checklist.

In fact, that checklist is still the primary lead magnet of the site because I haven’t gotten around to creating anything else yet. 🙂

So, while my CPC was higher last time, I was generating leads at a pretty decent rate last time.

This time around, I basically shot from the hip and didn’t fully prep the post before sending paid traffic to it. It was a nice post about improving the ride handling of a Class A RV, yet there was no lead magnet that catered to that interest. Instead, it was the same old used RV checklist.

That was not the right lead magnet.

Not only was it a different interest, but it was very unlikely to even apply to the people clicking on that post since they already owned an RV, in all liklihood. What do they need with an inspection checklist?

As the stats up above show, almost every single click I got was mobile traffic. Yet, my current opt-in set up is ridiculously unoptimized for a mobile experience.

I am only using one sidebar optin and one post footer opt-in.  Looks OK on a desktop, but when you’re on a phone…

This was a big redwood post. So, when you load it up on a phone, it is a LONG read with a lot of scrolling. You don’t see the first opt-in until you’re WAY down at the bottom. Plus, the way the interface is working, you basically see one form after another since  the sidebar shows up down at the bottom, too.

Bluntly, this was rather stupid.

This is what happens when I “shoot from the hip” and set up a Facebook ad without thinking much about the whole experience.

Surely, I can’t say I expected mobile traffic to make up such a significant percentage of the result, but that was just me not paying attention to the data. The overwhelming majority of daily use of Facebook takes place on mobile. 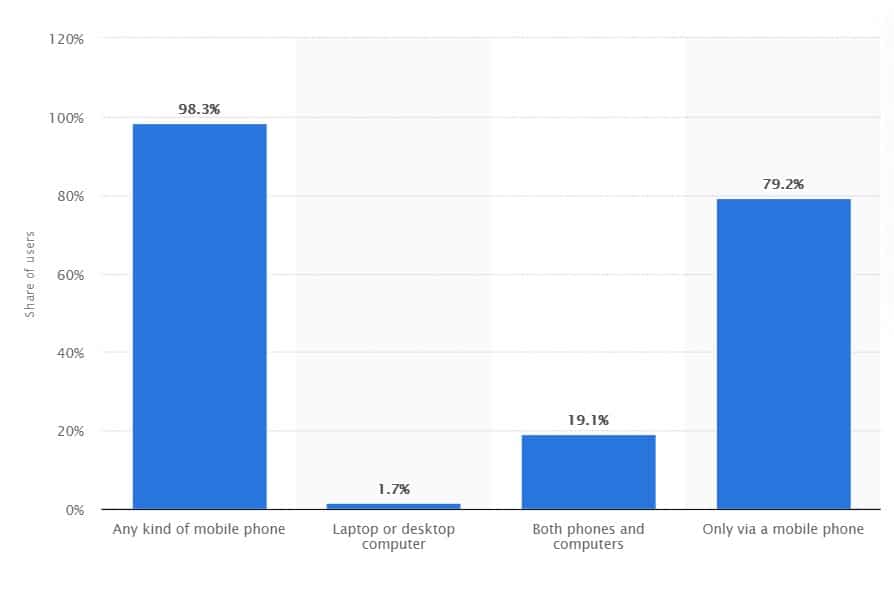 So clearly, I can drive traffic quite affordably here. That’s a great thing. But, in order for me not to be just throwing money at it for no reason, I need to be building the list. So, the changes that need to be made are:

Here’s how I positioned it last time I used paid traffic to a blog post on this site:

That button was right there toward the top of the post. When they clicked it, it triggered the opt-in. And that post was converting to list opt-ins at 12.6%!

Clearly, this time around, I didn’t apply my own knowledge. 😉 Shame on me.

Well, what I’ve definitely learned here so far is that I can apparently drive paid traffic to this site VERY affordably.

That’s a good thing. My goal  here is to 10X my traffic and clearly this is like a nice interstate-level road to getting there.

An interstate with a toll, mind you. But, hey, it would work. 🙂

Obviously, however, there’s no sense in doing it that way if there’s no leverage growth. It is nice that I could pay to 10X my traffic if I wanted, but it would all be for nothing since the moment I turn off the ad, everything reverts. Plus, the blog is not monetized yet so there’s no ROI on the ad spend.

Over the last 30 days (as of this writing), my daily page view average has been 125 page views. That’s about a 40% improvement over where I started with this challenge. But, that also included $15 in paid traffic. And the list didn’t really grow much.

So, the next step is to:

Does It Make Sense To Spend Money To Grow A Blog?

I am more than willing to invest a bit of money into this project if it is growing my list. Because I know that list growth is ultimately what grows the community and builds leverage.

Traffic for the sake of traffic means very little.

All online properties have a startup cost. The idea that you can start a blog and grow it reliably by doing nothing but publishing new posts and sharing on your own social profiles…. is just a fool’s errand.

Running Facebook boosted posts like this is SUPER easy to do. It doesn’t cost much money at all. And you learn new things that you can apply for the next go-around. That $15 I spent taught me:

I’ve dealt with a lot of bloggers over the years here at the Academy that balk at the idea of spending any money on paid traffic for a blog. But… why? That’s short-sighted.

Obviously, I’m not going to go forever without a monetization strategy. I haven’t figured it out yet, but I will. Then, I can grow this community sustainably.

But, for now, it is cheap and I am learning something. If one can’t spend a few bucks on such things to start a blog and learn the audience, you might as well not even try to start a blog.

This is just the internet as it is today.

So, as of now, my “big picture” strategy for growing and 10Xing the traffic to that blog will be:

And as always, you can follow along with me easily. Just get in on the 10X Blog Traffic Challenge. You’ll also get a free Starter membership in The LAB for access to some extra resourses.

See ya on the next update!