Blog Comments: Buh Bye. Why I Turned Off Comments On This Blog.

After 18 years of blogging, I have decided to turn off the comments. Here, I explain my thinking behind it... and you can make your own decision that suits your blog best. 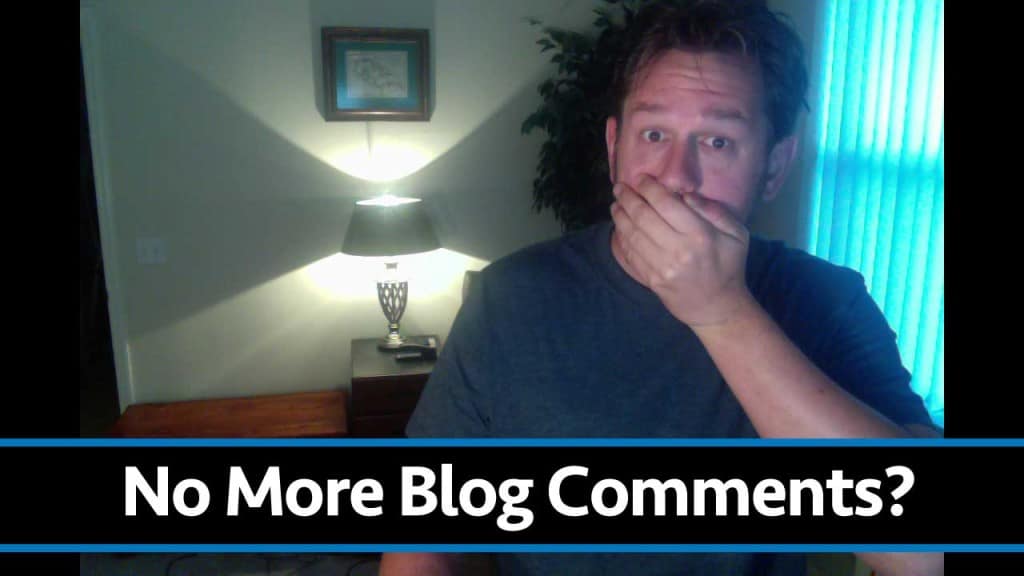 Ever since I began blogging, I’ve had comments turned on. And we’re talking about an 18-year history of blogging, since I’ve been at this a long time.

However, I just recently went live with some minor design changes to the Blog Marketing Academy, and part of this change is that I have now turned off the ability to post comments.

Why did I do this? Is this me just being antisocial?

Let me spell it out for you – and then you can make a decision for YOUR blog that makes sense. Because this is one of those decisions that will be unique for everybody. Every site and every community is a bit different.

Are Comments Really That Important?

In working with other bloggers for about 8 years now, I’d found that many have this artificial stress about whether they get comments or not. When they’re not seeing comments on their posts, they feel they’re doing something wrong.

This blog used to get more comments. It used to be fairly normal for a blog post to get 20-30 comments or more without me doing anything. But, maybe 3 years ago, I saw the volume begin to subside.

But, here’s the thing…

My traffic did NOT go down. And more importantly, the revenue of the Blog Marketing Academy has gone UP.

So, there is literally no correlation between the quantity of blog comments and the viability of the business.

That’s an important – and primary – point. But, then there’s…

The comments which were coming in were primarily spam.

Just troll-y pricks littering up my database in an attempt to put bogus backlinks into my site. All these spammers were cluttering the database and taking up server resources. All so that me or my assistant would have the lovely task of going in there and deleting the crap that Akismet left there for us to moderate.

Almost a total waste of time.

I say “almost” because – certainly, we got some legit comments. But, the overwhelming majority was just a waste of everybody’s time. If it wasn’t outright spam, it was something vague like “very helpful post” that added no value to the conversation.

Speaking of that conversation…

Interestingly, of the comments that were legit and we allowed through, I noticed two kinds that could go somewhere else:

Now, questions are always fine with me. I always invite them. Thing is, the comments are a rather off-channel way to ask them. For me to be able to provide the most immediate response and ensure I don’t miss the question, it is best to ask me via email or via Facebook.

Social media is really far superior than blog comments for any kind of online conversation.

Personally, I prefer Facebook. Our private Lab community is awesome because it resides on a platform we’re all on almost every day anyway. I can easily chime in regardless of location because it is so easy to use with my phone.

Plus, Facebook is tied to real identities which greatly reduces the spam problem.

The Visual Impact Of Comments

One other thing about blog comments…

They can potentially add a lot of stuff to the end of your blog post. Even if the post has no comments, you’ve got that comment area down there with the submission form that takes up a fair amount of real estate.

Looking at it from a pure marketing perspective, that’s valuable real estate you could use for something else. Or simply get it out of the way and make any calls to action you include there more effective due to lack of distraction.

Anything you place after the blog post will convert better if there’s no clutter around it.

Or you could do what I have done here and that’s make the site’s footer actually useful. On blog posts, I’ve placed related posts into the footer. The footer is actually visible now because I removed all the stuff after the post.

When I write a blog post here at the Academy, it has a purpose. That purpose is to help the reader and then move those who wish to take the next step into that next step. Asking a question in the comments opens up a loop because now they’re waiting for an answer… one they might not even know I answered due to the way the comment system works.

So, I believe getting rid of the comments allows the blog to be more streamlined for it’s actual purpose.

The purpose of my blog is to provide value then funnel people along so as to provide the transformation they seek. The purpose of social media is to have conversations, and it is FAR superior at that than a blog will ever be.

The SEO Value of Comments

Yes, there is an SEO benefit to having comments – if you actually get good, targeted comments.

On this one, you’re looking at a cost/benefit analysis. Does your blog get enough targeted, quality comments that would give you that SEO benefit? If so, it’d be worth keeping.

In my case, the cost outweighed the benefit.

Plus, if you understand how SEO works these days, you realize there are a LOT of ways to optimize a blog post and rank in search that don’t require comments.

Is It Right For You?

I would never venture to tell you what is best for your blog. This is a decision you have to make for yourself.

In my case, I kept comments around for a long time after I realized they weren’t giving any value. I did this because there’s this normalcy bias in place in the world of blogging about it. Blogs are supposed to have comments. I’ve heard people say that it isn’t a real blog unless you can post a comment on it.

But, that’s all just semantics. In the end, your site is about what delivers the most value to both you and your reader.

Certainly, if your blog essentially gets no comments and is just a spam magnet, I would consider disabling comments. Having comments turned on and never getting any can be deflating, but it is also negative social proof that can make your blog seem slow and dull. You might as well simply get rid of them. Comment counts are more of a vanity metric anyway.

If, however, you already have a community in place and they’re a fairly chatty bunch, then definitely leave it in place. Depending on the size and activity level of your reader base, you could lose a kind of intangible benefit to your website by turning off the comments. Even if you’re wide open to conversation on social media, a large active community is going to have those people who want to post real comments on your blog, too. And in that case, I wouldn’t throw up any barriers to it.

This is a new decision for me, as of June 2016. I don’t promise that I’ll never reverse myself. I certainly don’t anticipate it, but never say never.

But, others have turned off comments and left them that way. For instance, Chris Brogan still blogs with no comments.

Personally, I think Facebook is a better avenue for it. A Facebook Group is superior to blog comments in almost every way, except SEO (of course).

Plus, not to sound snotty, but I need to spend my available time interacting with my Lab members and answering THEIR questions as fast as I can. 🙂 There’s a reason to become a customer of mine… and it isn’t just about content.

If I ever do reverse myself on this, it will likely be by using a different platform for my comments. Perhaps Facebook comments or Disqus.

But, until that point… comments off.

I always love interacting with you. I’m easy to reach. If you’re on my email list, you can hit the reply button on any email you get and it comes into us. Dawn will often see it first, but if it is for me she assigns it over. Point is… we don’t hide. We don’t bounce replies back into the internet abyss. We’re here. And I love to talk to you.

But, we’ll use the channels best suited for it. That’d be email or Facebook.

And I’ll see you over there. 🙂