For new bloggers, picking the right niche can be a paralyzing kind of decision. Will anybody care? Is there any money to be made? Those post covers 6 of the biggest mistakes I've watched people make over the years when it comes to picking their niche. 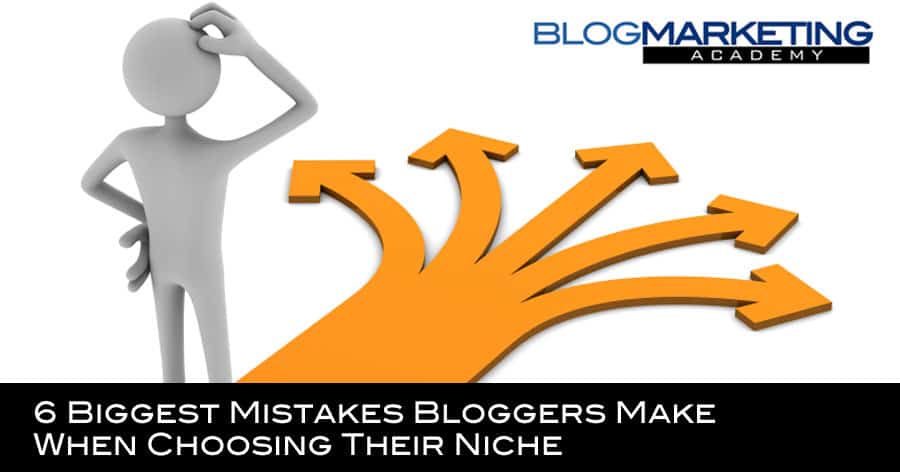 So, you want to build an online business. And perhaps blogging seems like an avenue which would work for you. But then, for many, they hit the very first wall and struggle.

What niche should you go into?

What should you blog about? Is there any potential for you within that topic? And, is there any money to be made?

These questions end up paralyzing a lot of people. That fear of getting it wrong often means you don’t make any forward progress. In some cases, people DO start their blogs but that nagging question remains on whether the market they chose is a good one.

In this post, I’m going to talk about six of the biggest mistakes that are often made when it comes to picking a niche. But first…

What Is A Niche And Why Does It Matter?

Just in case you’re not familiar with this word, I want to define it for you.

A “niche” is simply the market (or a subset of a market) which you intend to serve. In blogging lingo, it is what you’re going to blog about.

The choice of niche is important because it has a direct impact on the potential for making money down the road. It also impacts your ability to get traffic to your site.

Here at Blog Marketing Academy, my focus is blog-based marketing which then powers a BUSINESS. And businesses make money.

So, that’s my angle as I come into niche selection. I’m looking at it in terms of ability to build a business in that niche and serve that marketplace. Obviously if you’re doing this solely as a hobby and you just want to blog about something you think is cool, then go right ahead!

If money isn’t part of your equation, then you can leave this post right now. However, if money is something you do want from your blog, read on.

I especially want to make that clear, given the first mistake…

Mistake #1: Basing It Only On Your Passion.

It is great to have a passion about the niche you go into with your business, but it isn’t a requirement. It isn’t even the first priority.

If you have business ambitions for all this, then it is actually more important that you look into the things on which businesses are made:

Many bloggers make the mistake of going too broad with their niche. They stay too general and their potential audience is way too big.

As an example, I see this pretty often in the “personal development” niche. I see a lot of bloggers who start up blogs in this niche out of a true desire to help other people. I think it is commendable. Problem is… from a business perspective, it is WAY too broad. And they end up with a bland blog full of quotes and pump-me-up’s – none of which is going to generate any business whatsoever.

Not to mention trying to serve a market with motivational quotes is rather funny. Who searches the Internet for motivational quotes? If a person is unmotivated, do you think they’re the type who will be motivated enough to take such an action? Much less buy anything? But, I digress. 😉

You have to get more specific with your selection of niche. And what I mean by that is that you want it to target a specific type of person who is motivated by a certain thing. And that thing needs to be specific enough where you can get to them.

Mistake #3: Thinking No Competition Is A Good Thing

Classic mistake. You have this idea that gets you excited. You go online and look and you see that nobody is doing it yet – and you think that’s awesome and that means it will be smooth sailing.

Not so fast, cowboy.

Personally, I would much rather go into a niche where I saw other people selling things than one where I’m the only one. That competition helps foster demand. You don’t want to be in a position where you’re having to educate your market into having a demand for what you sell. That’s an often-lost uphill battle.

Besides, the internet is a HUGE place. There’s really no such thing as “competition”. You winning doesn’t mean they have to lose.

Mistake #4: Having No Unique Selling Proposition

The unique selling proposition (or USP) is what sets you apart. It is why somebody should pay attention to you over somebody else.

When a blogger goes too broad (see mistake #2) and then does it without being unique in any way, then nothing is going to happen. Traffic remains flat-lined (usually in single digits).

Why should somebody pay attention to you over somebody else who talks about the same thing?

It could be about content quality. It could be about your personality. Your style. Your professionalism. Your level of detail. Your ability to explain things in a way which your audience understands. You get the point.

A USP doesn’t have have to mean talking about something which nobody else talks about it. More often than not, it can be about HOW you do it and how that’s different than the other guys.

Mistake #5: Not Properly Gauging Your Own Interest

The last thing you want to do is run out of content ideas after only a few blog posts. 🙂

I’ve often told people to do what I call the “idea file test”. And it goes like this…

Sit down and list off 50 blog post ideas for a niche you’re thinking of tackling. Yes, 50 of them.

If you can’t get to 50, then your interest level might not be there.

Mistake #6: Having No Business Model

As I said above, business is my angle here. So, from that standpoint, if you go into a niche with no earthly idea how you’re going to make money, you’re being dumb.

That’s the problem with monetization. For many, it is an afterthought. They start the blog then later go around and try to figure out how to make money with it. That’s the exact reverse of what you should be doing.

Part of judging a niche is to look at business opportunities. And you should figure out what you’re going to do before diving in. Sure, it can adjust on the fly (and it probably will), but you at least have to have SOME idea.

And if you really want to make a good income, your business model shouldn’t revolve all around banner ads.

Deciding on a good blogging niche can be a daunting choice. If you’re not guided by something, then what often ends up happening is that you get into a weird game of “follow the leader”.

What happens is that you know you want to make money, so you go out and look for people who are making money and see what they do. Then you try to copy it.

It doesn’t really work. This is what leads to those guys who start blogs in the “make money online” market who are still floundering around trying to learn how to make their first buck. 🙂

Don’t be one of those people.

Picking a niche can be a lonely job. It is a big decision, yet you have nobody around you who can properly guide you. You’re on your own. And the last thing you want to do is pick the wrong one and waste a lot of time.

Well, if this is something you’re struggling with, I have a course inside the Blog Monetization Lab to help you.

It is simply called… Finding Your Niche. I have been doing this a long time. In fact, I didn’t always get it right.

I created my first blog in 1998 – in the technology niche. Talking about dorky things like building computers and how PCs worked. At the time, it was a good niche. Today, it is a MUCH more difficult niche to make a business out of. I managed to do it. It wasn’t easy. But, I tell you one thing…

I learned a LOT about niche selection over the course of running that site. I know first hand some of the mistakes that can be made, because I got a lot further down the road with it and had to work my way through some issues that I could have understood in the beginning – if I only knew.

Then, there’s the Academy itself. With this site, I knew full well what I was doing. Not only that, over the last 6 years, I have helped scores of bloggers in the beginning phases of their blogging. The idea of niche selection is a common one, let me tell you. 🙂

So, I put together a short little course designed to talk you through the selection process. It is video-based. Easy to follow. And by the end, you’ll make a decision.

This course is part of the Blog Monetization Lab.